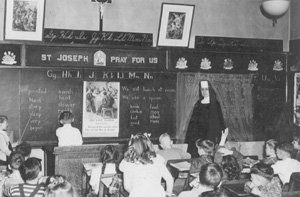 On June 29, 1948, North Dakota voters passed an initiative that prohibited Catholic nuns from wearing their habits while teaching in public schools. Known as the Anti-Garb bill, this law was the culmination of a long battle to drive nuns from public schools. Due to a shortage of qualified teachers and insuficient funding for public education, many states, including North Dakota, had hired nuns to teach in public schools during the first half of the twentieth century. Fearing that the Catholic Church would dominate public education, many communities opposed this practice. North Dakota became the center of opposition on the Great Plains.

While North Dakota schools had employed nuns since 1918, no formal protests appeared in the courts until the 1936 case of Gerhardt v. Heid. Filed against three Benedictine sisters who wore their religious garb while employed by the Gladstone school district in Dickinson, North Dakota, this civil case eventually reached the North Dakota Supreme Court. The plaintiffs argued that the primarily Protestant schoolchildren's First Amendment rights to freedom of religion had been violated by constant exposure to their teachers' religious garb. Interestingly, the nuns also invoked the First Amendment, arguing that a ban on wearing habits would be a violation of their right to practice their religion. Because the sisters had not taught religious doctrine or required students to participate in religious activities, the supreme court ruled in favor of the sisters.

The court's ruling did not end protests against the employment of nuns in North Dakota public schools. During the 1940s, for example, the legislature twice failed to pass antigarb bills. In 1948 an organization known as the Committee for the Separation of Church and State (CSCS), primarily comprised of Protestant ministers, led a campaign to have an anti-garb initiative put to the voters. The real issue was not the clothing worn by the sisters but rather a fear that nuns would impose a sectarian influence on schoolchildren and that the Catholic Church would eventually dominate public education. After collecting more than 100,000 signatures, the cscs filed a petition with the secretary of state, and the initiative was placed on the ballot for the 1948 election.

In response to the cscs's initiative drive, a group called the Committee for the Defense of Civil Rights organized to battle the anti-garb bill. Using leaflets, pamphlets, and speeches, both sides waged an intense public campaign, and voters thronged to the polls–10,000 more turned out for the 1948 election than for the previous gubernatorial election. Despite more than 50,000 non-Catholics voting against the initiative, voters passed North Dakota's anti-garb bill.