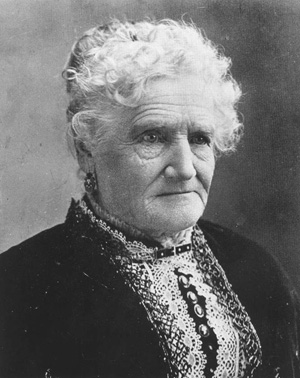 When the commissioners of Sweetwater County, Wyoming Territory, approved Esther Morris as a justice of the peace on February 12, 1870, she entered history as the first woman magistrate in the nation.

Morris was born in Spencer, Tioga County, New York, on August 8, 1814. Orphaned at an early age, she learned to support herself and developed a sense of independence. She lived for more than twenty years in Peru, Illinois, where she raised her family. In 1869 she moved west to the rough-and-tumble gold-mining town of South Pass City to join her husband and oldest son, who had moved there the previous year in search of gold. Five months later, women in Wyoming Territory were the first in the nation to be granted suffrage. One of the few advocates of women's rights in the small mining town, Morris was encouraged by local citizens and an influential judge to apply for a vacant justice of the peace position. She was appointed on February 17, 1870.

Justice Morris's first case involved the prosecution of her predecessor, who refused to turn over the court docket to her as a female judge. The case was consequently dismissed without the transfer of the docket, and Morris purchased a new book in which to record her cases. Serving less than nine months, she tried twenty-eight cases, including ten assaults.

Although she chose not to stand for election at the end of her appointed term, Esther Morris earned the respect of the predominantly male, antisuffrage local citizenry. Even though she was erroneously dubbed the "Mother of Woman Suffrage" in turn-of-the-century newspaper and historical reports, she did work diligently for women's rights, and Judge Morris rightfully deserves national attention because of the precedent she set. She died in Laramie on April 2, 1902. Her statue stands in front of the Wyoming State Capitol in Cheyenne.