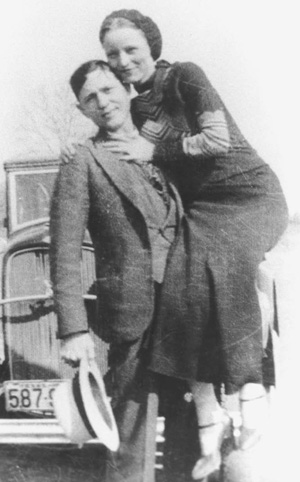 Bonnie and Clyde on a road between Dallas and Marshall, Texas, shortly after the car pictured was stolen, 1933

Bonnie Parker and Clyde Barrow came of age during the Great Depression and ultimately led authorities on a deadly twenty-seven-and-a- half-month spree of robbery, abduction, and murder between 1932 and 1934. They represented a new breed of bandit: youths, predators really, traversing mostly rural parts of an America not too far removed from the preindustrial Old West but employing the technology of their age such as automatic weapons and automobiles.

Their robberies, though involving banks from time to time, consisted largely of petty thefts, often from grocery stores and filling stations. As thieves they held no notoriety, but as dangerously slippery fugitives, Bonnie and Clyde were something quite apart. Indeed, the inevitability that Clyde Barrow would open fire when cornered and probably succeed in shooting his way out of almost any situation, taking Bonnie with him, was the stuff upon which the legend of Bonnie and Clyde was based. The fact that they were young and by all accounts deeply in love added fuel to the legend. It has also contributed to the ongoing tendency to romanticize their deeds and misdeeds, which is unfortunate. There was nothing romantic about their lives–not for Bonnie and Clyde and certainly not for their victims.

By the time they died in a bloody hail of gunfire on May 23, 1934, Bonnie and Clyde were linked to the deaths of nine lawmen and four or five civilians, depending on the source. Of these, Clyde Barrow probably killed five, perhaps six. The rest were gunned down by accomplices like Joe Palmer, Henry Methvin, and Clyde's brother Buck. Interestingly, Bonnie Parker, despite her image, rarely handled weapons. In fact, there is no hard evidence that she ever shot anyone, except herself once, in the foot, while clowning around with one of Clyde's guns.

Bonnie Parker was born on the Plains on October 1, 1910, in the West Texas town of Rowena. Clyde Barrow was born on March 24, 1909, on the fringe of the Great Plains in Telico, Texas, forty miles south of Dallas. There is some debate among family members as to whether he was born in 1909, as is usually cited, or in 1910, as recorded in the family Bible. Nevertheless, by 1922 both families were living in West Dallas, at the time an unincorporated slum of dirt streets and shotgun shacks located just across the Trinity River from downtown Dallas. It was there, at the home of a mutual friend, that Bonnie and Clyde first met. The year was 1930.

Two weeks later, Barrow, already quite involved in crime, was arrested and subsequently sentenced to fourteen years in the Texas penitentiary for burglary and auto theft. In 1932, because of prison overcrowding, he was issued a conditional pardon and released. He quickly rejoined Bonnie and for a time tried to go straight, working at a Dallas glass and mirror company while she waited tables at a cafe near the county courthouse.

Barrow's status as an ex-convict from West Dallas made him the inevitable target of random police roundups and incessant questioning. In March 1932 he was fired from his job because of the bad image he had acquired from being visited so frequently by the police. At that point, Barrow left town and took to crime with a vengeance, swearing he would never be taken alive. Initially, Bonnie accompanied Clyde only sporadically, but by mid- August 1932 she was with him almost constantly, vowing to die with him.

Although many of their more notorious crimes and gun battles took place beyond the Great Plains, Bonnie and Clyde were no strangers to that part of the country, ranging throughout the region from Mexico to Canada. On August 14, 1932, Bonnie and Clyde, along with a friend named Raymond Hamilton, abducted a New Mexico deputy sheriff and drove him all the way to the Texas Hill Country. The lawman had pulled up to the Carlsbad home of Bonnie's aunt to take a closer look at what he correctly identified as a stolen car. Suddenly, he found himself staring down the bore of a shotgun and being loaded into the very car he was trying to investigate. Twelve hours later, the deputy was given a few dollars and released fifteen miles from San Antonio.

On June 10, 1933, Bonnie and Clyde and another cohort named W. D. Jones were involved in a grinding one-car wreck near the Texas Panhandle town of Wellington. Barrow and Jones were thrown free and miraculously escaped injury, but Bonnie was briefly trapped in the car and severely burned. When two lawmen arrived, Clyde and Jones abducted them both and transported them, along with the injured Bonnie, to Erick, Oklahoma, using the officers' own car. Bonnie survived her burns, but subsequently she could neither walk nor stand without some form of support.

Bonnie and Clyde frequently prowled Kansas, which, according to former gang member Ralph Fults, was the best bank-robbing state in the Union because of its numerous straight roads, each intersecting every mile or so with another road, creating a network of escape routes virtually impossible to seal off. Clyde Barrow robbed his first bank in Kansas along with Fults and Hamilton.

In September 1933 Barrow and another pair of accomplices tried to hijack a car from a group of people playing croquet in Meade, Kansas. A woman in the group attacked the outlaws with her mallet, clubbing and capturing one of Barrow's companions. Barrow and the third man managed to escape on foot. On April 29, 1934, Bonnie and Clyde stole a brand new Ford V-8 Deluxe from the driveway of Jesse and Ruth Warren in Topeka, Kansas. The car only had a few hundred miles on the odometer, but when it turned up a little more than three weeks later on a narrow dirt road eight miles south of Gibsland, Louisiana, it had been driven more than 6,000 miles, and Bonnie and Clyde were slumped in the front seat, bloodied and filled with bullet holes. They had finally fulfilled their vows, dying together, violently and in a car, a car stolen on the Great Plains.