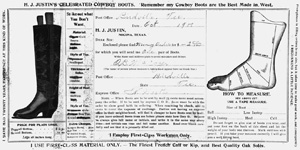 More than a century ago, "Big Daddy" Joe Justin never dreamed his boots would become the "Standard of the West." He just knew he did not want to be a cigar maker like his father. Spanish Fort, Texas, south of Red River Crossing on the Chisholm Trail, was a bustling town in 1879 when twenty-year-old H. J. "Joe" Justin arrived from Lafayette, Indiana, with five dollars in his pocket. He began repairing boots. With a thirty-five-dollar grubstake, he soon opened a small shop and made boots for the trail hands. Justin married Annie Allen of Hood County, Texas, in 1886, and the couple's first son, John, was born in Spanish Fort.

When an east–west railroad was built eighteen miles south, Spanish Fort's businessmen moved to the tracks in 1889 and established Nocona. In 1894 Joe and Annie devised a self-measuring kit for ordering boots by mail, and cowboys across the West soon wore Justin boots. The Justin family grew to three boys and four girls. Annie and the children all worked in the boot shop alongside Joe.

The two oldest boys, John and Earl, became partners in 1908 with their father in H. J. Justin and Sons. John and Earl supervised ten to twelve men in the shop, and Joe traveled around the country with boot samples. In 1911 the company did $180,000 in boot business in twenty-six states, Canada, Mexico, and Cuba.

Joe Justin's health began to fail in 1916, and he turned the company over to his sons, John, Earl, and Avis. When Joe Justin died in 1918, his boots were already a legend of the American West. In 1925 Justin's sons moved their growing company to larger quarters in Fort Worth, where better shipping facilities and a ready workforce were available. Their sister, Enid Justin, chose to remain in the old shop and continue production as Nocona Boot Company.

Justin boots continued to grow in popularity, with new styles, stitching, leathers, and lightweight boots–the "Western Gypsy" line–designed especially for women. In 1950 John Justin Jr., Joe's grandson, was named vice president and general manager. He soon took full control of the company. By 1952 company sales topped $1 million for the first time. His innovative ideas on designs, production, and marketing led to H. J. Justin and Sons' continued growth. By 1954 the company was shipping 100,000 pairs of boots a week.

John Justin Sr. worked at the plant until his death in 1959. John Jr. bought the remaining family-owned shares in the company in 1967 and became sole owner. Two years later, Justin became chief executive officer of Justin Industries, Inc., a diversified holding company, with the boot company as one of its four subsidiaries.

John S. Justin Jr. retired as CEO of Justin Industries in 1999. For the first time in 120 years, the reins of management of the boot company passed to the hands of someone other than a member of Joe Justin's family.