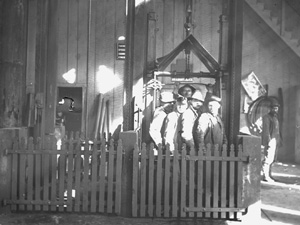 Homestake Mining Company began operations in the Black Hills of Dakota Territory (now South Dakota) in 1877 after a group of California miners purchased the Golden Star and Homestake claims for $70,000. These original claims comprised approximately ten acres. By 1999 the Homestake Mine had grown to more than 8,000 acres of patented claims and was the oldest continually operating gold mine in the world.

Located in Lead, South Dakota, Homestake Mine consisted of an "open cut" surface operation as well as an 8,000-foot-deep underground mine. Over the years, the Homestake Mine produced more than 39 million ounces of gold, and there were an additional 4.7 million ounces of proven and probable reserves as of 1997. In 1998 the Homestake Mine experienced major restructuring with the implementation of a new operating plan that was designed to lower production costs in the underground mine from $355 per ounce to $280 per ounce. The company also spent nearly $100 million to reclaim portions of the Whitewood Creek Superfund Site that served as a tailings and municipal waste dump for nearly 100 years.

Homestake Mining Company entered the New York Stock Exchange in 1977. The company had focused solely on gold mining until the 1950s and 1960s, when it delved into uranium, lead, and zinc mining. The company became even more diversified in the early 1980s, when it purchased fossil fuel developments. Homestake also aggressively acquired additional gold mines in Australia and Canada at this time. In early 2001 Homestake ranked as the second largest gold producer in the United States.

The Homestake Mine itself, however, has experienced an interesting turn of events. Despite the new operating plan, falling gold prices and depleted reserves led to cutbacks and ultimately closure of the mine. The Homestake Mining Company removed its last gold ore on December 14, 2001, merged with Barrick Gold of Toronto, ceased mining operations completely on December 31, 2001, then donated the mine for use as an astrophysics laboratory. A small laboratory run by the University of Pennsylvania for nearly twenty years deep in the underground mine served as the nucleus for this newer, larger National Underground Science Laboratory. Work at this new lab would focus on the study of subatomic particles emitted from the sun, called neutrinos, at a depth of 7,400 feet beneath the surface. At this depth, interference from background cosmic radiation is filtered out, allowing only neutrinos to pass through. The laboratory received interim funding in the fall of 2001, and a proposal for the five-year, 281-million-dollar facility was submitted to the National Science Foundation in 2001. The final funding decision is still pending. The National Underground Science Laboratory would hire a number of former Homestake employees and bring in astrophysicists from all over the world, continuing the long and storied legacy of the Homestake Mine. As of April 2003, Barrick Gold had agreed in principle to donate the mine for use as a laboratory, but only if Barrick stockholders were protected from environmental liability for the property.