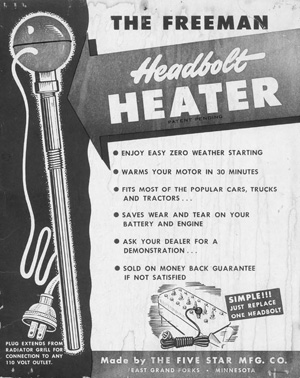 Advertisement for the Headbolt Heater

Without a doubt, necessity was the mother of invention in the case of the headbolt heater– necessity and an enterprising man. The necessity was getting a car to start in the frigid North Dakota winter; the man was Andrew Freeman, an electrical engineer who, as general manager of Minnkota Power Cooperative, brought electricity to the rural areas of North Dakota.

The year was 1947, and Freeman, like everyone else in Grand Forks, found that even if he succeeded in getting his car running, it took so much out of the battery that soon the engine was dead. He started experimenting with devices that would heat the engine of his V-8 Ford. At first, using scrap copper tubing as inserts and a ribbon wire heating element from an old flatiron, he devised a method of heating the two hoses that went from the bottom of the radiator to the engine block. On a thirty-degree morning he attached the heating elements to an electrical cord, plugged it in, waited for two hours, and immediately started the engine. Unfortunately, when Freeman tried to install his invention on a neighbor's Plymouth, he found that it did not work; nor was it successful on another neighbor's Chevrolet. So he thought again.

Freeman concluded that he needed a way to get heat directly to the water in the engine block. He discovered that in most cars the headbolts extended directly into the water. After much experimentation over a period of three years, Freeman developed a system that transmitted electricity via a brass tube through a replaced headbolt into the water. The electric lead extended from the heater through the radiator grill to the outlet.

In 1947, with two colleagues, Freeman formed the Five Star Manufacturing Company of East Grand Forks to manufacture headbolt heaters. The company did not do well at first, not least because there was a manufacturing error in the first 25,000 heaters. But soon the product was refined and the manufacturing process mechanized until the company was turning out 200,000 heaters a year for sale in the United States and Canada. Altogether Freeman estimates that he sold as many as two million headbolt heaters.

Eventually, other types of tank and plug heaters took over, and improvements in engine design diminished their general necessity. Still, engine heaters continued to go by the name "headbolt heaters," which is testimony to the lasting legacy of Andrew Freeman's invention.