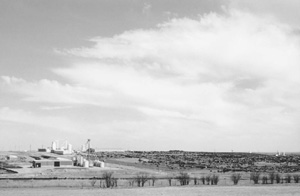 Grass, corn, and cattle are abundant in the Great Plains. When corn production became efficient, corn was fed to produce rapid and efficient body weight gains in cattle. American consumers developed a taste for "finished beef," which has sufficient marbling to produce the taste and juiciness we have become accustomed to. Cattle feeding based on corn first developed in the Corn Belt, and markets were centered around Chicago. The Corn Belt expanded into the Great Plains due to irrigation, and sorghum was produced in drier areas to substitute for corn in feedlot finishing diets.

Today's feedlots range from farmer-feeders to large custom feedlots. Farmer-feeders generally produce most if not all of the corn and forage fed to their cattle and typically own most of the cattle. These feedlots may have capacity for 1,000 to 10,000 cattle at one time. Custom feedlots are generally larger, with numbers up to 100,000 at one time. Cattle are typically fed for customers who own the cattle. The customer pays for the feed, health supplies, and "yardage"–the cost of facilities, equipment, labor, and so on. The custom feedlot makes a profit by maintaining customer cattle near capacity. The feedlot must operate very efficiently to maintain the customers.

Feedlots vary from simple facilities to sophisticated, computer-operated feedlots with veterinary and nutritionist consultants. Feed is mixed and fed to the cattle two or three times daily with feed trucks. Larger feedlots have feed mills that operate with computers, in some cases unattended by employees. The feed trucks have electronic scales and in many cases onboard computers that are used to record the amount of feed allocated to each pen. These records are then downloaded to the primary computer for accurate recording and billing to customers.

Health of the cattle is monitored daily by a "cowboy crew." These individuals typically ride a horse through each pen of cattle (usually 200 head). Sick animals are removed from the pen and taken to a "hospital" area for treatment and recovery. Innovative feedlots now have mobile hospitals that move to the cattle pens, where the cattle are treated. Most common health problems are respiratory diseases; however, few cattle become sick.

Feedlots typically employ one person for each 1,000 cattle. Primary jobs are feeding and health care, but maintenance and business procedures are also important jobs. Cattle enter feedlots at different ages and weights and spend 100 to 200 days in the feedlot. This diversity is necessary to provide a consistent supply of cattle to consumers. Cattle require forty to sixty bushels of grain while in the feedlot and the equivalent of about one-third ton of hay. It takes about one-half acre of cropland to produce this much feed. Because of the forage used for cows and growing of feedlot cattle, only two to three pounds of corn are required to produce a pound of finished animal. Typically, feedlots have extensive runoff facilities to ensure that no waste leaves the feedlot uncontrolled to enter surface or groundwater. The waste from the feedlot is returned to the cropland as organic fertilizer. Cattle are typically worth $700 to $900 each at market time. Most feedlots market two and one-half times their one-time capacity. Therefore, a 10,000-head-capacity feedlot would have sales of $20 million per year.