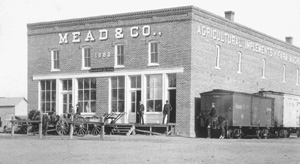 Forage and small grains are important regional crops in the semiarid climate of the Great Plains. Significant manufacturers of harvesters for these crops are located in the Plains. Hay and Forage Industries, formerly Hesston (Hesston, Kansas), produces a major line of hay and forage harvesters. The small round baler, conceived and developed by Nebraskan Ummo Franklin Luebben, was initially produced in Omaha. Manufacturing rights were purchased, and the baler was widely marketed by Allis-Chalmers during the period 1940 to 1960.

New Holland (Grand Island, Nebraska) and Gleaner-AGCO (Independence, Missouri) manufacture combines for grain harvest. MacDon (Winnipeg, Manitoba) makes combine headers. Winds common on the Plains often cause grain stalks to bend over and lodge before harvest. Companies such as Crary (West Fargo, North Dakota) supply attachments to pick up and lift the crop. Massey-Harris developed the self-propelled combine for use in the Great Plains during the late 1930s. It became firmly established during the 1940s, when there was a labor shortage due to World War II, and organized fleets of combines subsequently followed the annual wheat harvest northward.

Large open fields encouraged steam tractor plowing of the grasslands. Four-wheel-drive tractors with greater than 250 engine horsepower are commonly used on larger farms and ranches. They are produced by Case Corporation, formerly Steiger (Fargo, North Dakota), and New Holland, formerly Versatile (Winnipeg, Manitoba). In response to disreputable marketing of farm tractors early in this century, the Nebraska legislature passed a law in 1919 requiring that all tractors for sale in that state be tested. Although the law was amended in 1986 to permit standardized testing from other facilities, the Nebraska tractor test has been a standard by which most North American tractors are judged.

In addition to larger manufacturers, hundreds of smaller shops throughout the Great Plains build, modify, supply parts for, and repair farm implements. Their presence is evident on the landscape of most Plains towns of any size. Rather particular to this part of North America, a harvest brigade of parts and repair workers follows the annual wheat harvest by custom combine operators from the Texas Panhandle north to the international border.