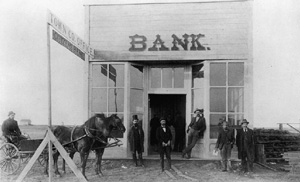 Banking's role in the Great Plains economy has long been important and controversial. Most Great Plains states developed a commercial banking system after enactment of the National Banking Acts of 1863 and 1864. National banks were required to hold relatively large amounts of capital and could not make direct loans to real estate. Nonresidents owned many Great Plains national banks. State banks, which had lower capital requirements and made direct real estate loans, were more numerous in the sparsely settled, agricultural Great Plains and were usually locally owned; successful merchants most commonly started Great Plains banks.

The unit-banking system proved to be fragile during economic downturns. After the Panic of 1907, several states experimented with state-run deposit insurance systems as an alternative to branch banking in providing stability to the banking system. Between 1907 and 1917 eight states nationwide adopted deposit insurance systems, including Kansas, Nebraska, North Dakota, Oklahoma, South Dakota, and Texas. Chain banks and multibank holding companies (group banking) also developed as ways to evade restrictions on branch banking.

During the 1920s and 1930s Great Plains banking experienced substantial turmoil. Prices of agricultural products rose during World War I, with a resulting rapid expansion in the number of banks. The postwar collapse of agricultural prices and of land values resulted in numerous bank failures when banks saw the value of their loans dramatically fall. During the 1920s state-run deposit insurance systems may have intensified difficulties by encouraging banks to take too many risks. The banking system further contracted during the early 1930s. In addition to failures of thousands of unit banks, many chain banks and bank holding companies did not survive the Great Depression; however, some continued to play a significant role in Great Plains banking. For example, Minneapolis-based First Bank and Norwest systems both owned many banks in the Dakotas and in Montana.

The banks in the Prairie Provinces of Canada fared much better during the 1920s and 1930s. A merger movement among Canadian banks occurred after 1900. By 1920 Canada had developed a nationwide branch-banking system that was characterized by national diversification and greater stability than in the United States; no Canadian banks failed during the Great Depression.

Dramatic changes in Great Plains banking occurred after 1980. Relatively high prices for agricultural and energy products caused many Great Plains banks to expand their lending to these activities during the late 1970s. The recession of the early 1980s combined with falling prices for agricultural and energy products to result in a bust in both sectors. The undiversified loan portfolios of many Great Plains banks resulted in numerous bank failures. This time, many savings and loan associations also failed. Between 1982 and 1994, 2,573 commercial banks and savings and loan associations failed nationwide. Texas alone accounted for more than 30 percent of these failures, while Colorado, Kansas, Nebraska, and Oklahoma combined accounted for more than 14 percent.

Since 1980 Great Plains banking has transformed from being predominantly a unitbanking industry to one that includes both statewide branching and interstate banking. Although the total number of banks has declined by more than 30 percent, there has been an increase in the number of bank branches. While an increasing share of bank deposits is under the control of large out-of-state organizations, many smaller community banks continue to flourish because they are able to provide more personalized services, which many customers still prefer, and they remain the best source of information concerning the credit-worthiness of local businesses.

Doti, Lynne Pierson, and Larry Schweikart. Banking in the American West: From the Gold Rush to Deregulation. Norman: University of Oklahoma Press, 1991.