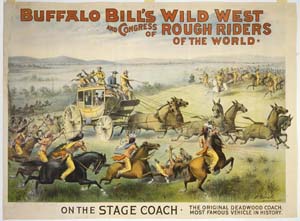 "On the stagecoach, the most original vehicle in history"

Wild West shows, including Buffalo Bill's Wild West, Pawnee Bill's Historical Wild West, Buckskin Bill's Realistic Wild West, and the Miller brothers' 101 Wild West Show, were outdoor spectacles of western pageantry that came out of the Great Plains during the last decades of the nineteenth and first decades of the twentieth centuries. The showmen who created these extravaganzas made Great Plains imagery their stock-in-trade. They paraded figures like the frontier scout, the Plains Indian warrior, and the cowboy hero, touted them as "real" or "authentic," and made them central to popular views about the American West at home and abroad. Their success stemmed from Americans' nostalgia about the passing of the frontier. The shows blended myth and reality in a simplified and patriotic fashion that reinforced popular notions about the nation's Manifest Destiny, identity, and gender roles: they were scripted dramatizations about the "winning of the West."

The character that best symbolized the winning of the West in Wild West shows was the frontier scout. The scout had been a standard hero of dime novels, but he became an even greater heroic icon through the Wild West shows. Showmen like William F. "Buffalo Bill" Cody, Gordon W. "Pawnee Bill" Lillie, Dr. William F. Carver, and similar self-promoters re-created themselves as scouts. They dressed in buckskins, were portrayed as sure and quick with wit and weapons, and assumed a rough-and-tumble facade that idealized westward expansion. They represented the triumph of the forces of good and of civilization, and they were held up to spectators as models of proper American manhood. Conquest of Native Americans was central to such an image, and Cody particularly identified himself this way, even (ironically, given the latter's fate) by associating his image with George Armstrong Custer.

Plains Indians were vital to the success of Wild West shows and were prominent in their advertisements and in the shows. Advertisements for Cody's show enticed crowds to come see the "horde of war-painted Arapahos, Cheyenne, and Sioux Indians," while Lillie employed Osages, Pawnees, and Kiowas in his show. Wild West shows depicted Plains Indian life as the antithesis to "civilized" life. They portrayed Native Americans as savages from a wild land but with a martial spirit that made them worthy adversaries, and so famous warriors became popular figures to include in show casts. Geronimo joined Pawnee Bill's show and was advertised as "The Worst Indian That Ever Lived," and Cody's hiring of Sitting Bull in 1885 led to the Sioux being the most prized Plains Indians in Wild West shows. Always, the role of Native Americans was to attack whites and to be conquered. Many of the great set programs of the Wild West shows–"The Burning of Trapper Tom's Cabin," "The Fight at Wounded Knee," "Capture of the Deadwood Mail Coach," and "The Battle of the Little Big Horn"–featured Plains Indian attacks. These programs demonstrated to viewers that the fight for the West was complete, that force had been necessary, and that victory was certain.

The cowboy hero, perhaps the most recognized icon of the Great Plains, had his beginnings with the Wild West shows. Indeed, before William F. Cody presented William Levi "Buck" Taylor to audiences, there was no popular cowboy hero. Cody and other Wild West showmen made the cowboy a saleable figure. Gradually, cowboys elbowed aside Native Americans and scouts as the major attractions at the shows, especially during the early twentieth century. Cowboys and cowboy skills became central to a myriad of Wild West shows, including the Millers' 101 Ranch show, with its rodeolike performances. It was on the Millers' show that Bill Pickett captivated onlookers with his sanguine art of "bulldogging" and easterner Tom Mix learned the cowboy-entertainer skills that he later transferred to silent Western movies.

The heyday of the Wild West shows ended in 1913, when Cody and Lillie dissolved their merged Two Bills show, though Wild West shows continued through the 1930s in combination with rodeos and circuses. Financial problems and the cinema's growing popularity contributed to the shows' demise. Still, before film took over as the vehicle of western imagery, millions of people experienced the "reality" of the Great Plains at various Wild West shows. The Wild West shows moved western life from the realm of history into mythology and popular culture and shaped ideas and images of America's frontier past that persist today.