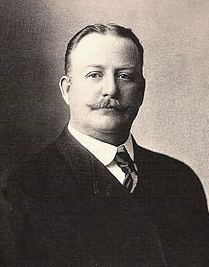 Photograph of sculptor Frederic Remington, circa 1909

Although Frederic Remington was the most prolific of all the artists who sought to portray the rapidly changing nature of the peoples and lands west of the Mississippi River in the latter half of the nineteenth century, his talents were not limited to the more than 2,500 paintings, drawings, and illustrations he produced in the last two decades of his life. He also authored a play, eight books, and numerous magazine articles and sculpted twenty-four major bronzes.

Born in Canton, New York, on October 4, 1861, Remington remained throughout his life an easterner, and with the exception of his limited and abortive attempt to raise sheep in Kansas from March 1883 to May 1884, he never lived in the Great Plains. Nevertheless, he became one of the great image makers of the nation's western experience and shaped the manner and vision by which eastern audiences thought about the Great Plains.

After desultory experiences in eastern military schools, Remington enrolled at Yale University in 1878 to study art. Energetic and robust at five feet nine inches and weighing almost 200 pounds, Remington gained more distinction on Walter Camp's 1879 football team than he did for his artistic studies. With the death of his father in 1880, Remington ended his university studies. Upon receiving his inheritance at the age of twenty-one, he invested this $10,000 in a sheep ranch on the fringes of the Flint Hills in Kansas. When this venture failed, he returned to Canton, married Eva Caten, took the balance of his inheritance, and became a partner in a Kansas City saloon. When success again eluded him, and with no discernible future before him as a rancher or saloon keeper, Remington committed himself to becoming an artist.

Within five years, Remington was one of the nation's leading illustrators. His drawings and illustrations appeared regularly in Harper's Weekly, Harper's Monthly, Outing, Century Magazine, Scribner's, and other major magazines. He also became one of the leading book illustrators of the era, with illustrations in Elizabeth B. Custer's Tenting on the Plains (1887), Theodore Roosevelt's Ranch Life and the Hunting Trail (1888), Thomas Janvier's The Aztec Treasure House (1890), and Henry Wadsworth Longfellow's Song of Hiawatha (1890). Seeking to avoid being identified just as an illustrator, he began to work in both oils and watercolors with the hope that he would be recognized as an artist.

In 1889 his dynamic Dash for the Timber was exhibited at the National Academy for Design, and the popular and critical reception of this work began to give him the artistic recognition he sought. In this same year his Lull in the Fight won a silver medal at the Paris Universal Exposition. Increasingly, his paintings depicted a West that was past. Frequently focusing upon the role of the cavalry in subduing the land and its Native inhabitants, Remington portrayed a West that was wild and antithetical to approaching industrialized civilization. What he admired in the West were mounted warriors, men on horseback. In the emerging tradition of western art, his paintings were both romantic and narrative. They sought to capture a time past and to commemorate it for the present and future. Determined to distance himself from his reputation as an illustrator and always willing to experiment artistically, in 1895 he began to work in bronze. In 1902 his dynamic Coming through the Rye demonstrated his growing mastery of this medium.

Remington died on December 26, 1909, near Ridgefield, Connecticut, following complications from an appendectomy.

Vorphal, Ben Merchant. Frederic Remington and the West: With the Eye of the Mind. Austin: University of Texas Press, 1978.