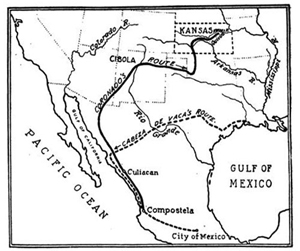 Rumors of the land of Quivira, one of many fantastic realms of gold sought by Spanish conquistadors, lured the army of Francisco Vázquez de Coronado into the Great Plains in 1541. Soon after the expedition failed to find the mythical Seven Cities of Cibola at Zuni in western New Mexico, the Spaniards received a delegation of Indians from Pecos (Cicuye), who welcomed them to their country. At Pecos the exploring party sent by Coronado met an Indian captive of the Plains whom they called the Turk. After the leaders of Pecos Pueblo persuaded the Turk to lead the Spaniards into the Plains and lose them, he was given to the Spaniards as a guide. On the buffalo plains beyond Pecos, the Turk told the soldiers so many and such great things about his country that they decided to return and report this welcome news to Coronado.

As understood by the Spaniards, in the farther part of the Turk's country there were large settlements and a river two leagues wide with fish as big as horses. The lords of Quivira had large canoes with sails and more than twenty rowers on each side, and their chief lord, a white-haired and bearded man called Tatarrat, worshiped a gold cross and an image of a woman, the ruler of heaven. King Tatarrat napped under a great tree adorned with many gold bells that swayed in the breeze and lulled him to sleep; so rich was the kingdom that everyone had jugs and bowls of gold and ordinary dishes of wrought plate.

After wintering at Tiguex on the Rio Grande, near present-day Albuquerque, the army went in search of Quivira in the spring of 1541. During the journey across the immense plains, Coronado realized that the Turk had deceived him. After sending the army back to Tiguex, he and Fray Juan de Padilla went on with a small company of horsemen and foot soldiers. Using friendly Teyas Indians as guides, Coronado reached Quivira in July and discovered it to be a province of the Wichita Indians in the vicinity of Great Bend, Kansas. These people lived in grass lodges, and their lord wore a copper necklace, but no gold and silver were found. After the Turk was killed for his treachery, Coronado returned to Tiguex, where his soldiers, poorly clothed and covered with lice, fantasized about the vast treasures they might have found had they continued to search for that better land.

Despite Coronado's failure, the chimera of Quivira continued to beckon. In 1593, three years before Juan de Oñate took formal possession of New Mexico, Francisco Leyva de Bonilla led an illegal expedition into the Plains in search of Quivira; he was killed by a companion, and most of his small force were killed by Indians. In 1601 an Aztec survivor of the Bonilla expedition guided Governor Oñate and some seventy men in search of Quivira. The Wichita Indians along the Arkansas River gave them beads before they recrossed the Plains in October. In the 1670s Don Diego de Peñalosa, a renegade governor of New Mexico tried by the Inquisition, presented an altered version of the Oñate expedition to the French government; it served, in part, to launch the La Salle expedition and the beginnings of international conflict in the borderlands. As late as 1720 the governor of Coahuila and Texas led 500 mounted troops into East Texas in an attempt to check French defenses beyond the Red River and to discover the rich lands of Gran Quivira.

Quivira and various other illusory golden realms were the products of the mythic imaginary West. Mistaken geographical theory, a thirst for gold, and the utopian dream of friars to convert the Indians made for the invention of America before reality intruded. The search for Quivira, like other fantasies, acted as a motivating force for the discovery, exploration, and eventual settlement of the Western Hemisphere. As America became better known, Quivira and other elusive kingdoms became themes of myth, fable, and fiction.

Vigil, Ralph H. "Spanish Exploration and the Great Plains in the Age of Discovery: Myth and Reality." Great Plains Quarterly 10 (1990): 3–17.