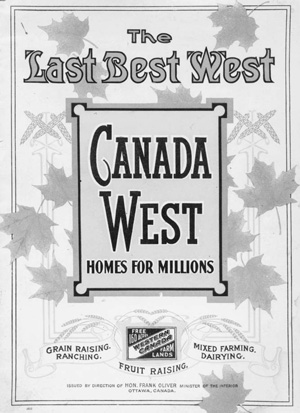 1908 Department of the Interior immigration pamphlet

The "Last Best West" is a slogan popularized by the immigration branch of the Canadian Interior Department in the early twentieth century. The phrase was used in the titles of promotional pamphlets produced by the Canadian government and distributed to potential settlers in Europe and the United States. Designed to dispel negative climatic and cultural preconceptions and extol the virtues of the Canadian Prairie for agricultural settlement, these pamphlets played a significant role in the aggressive immigrant-recruiting campaign staged by Clifford Sifton, minister of the interior from 1896 to 1905. Sifton believed that promoting settlement of the Prairie Provinces was a crucial national enterprise, and the largest infusion of immigrants to the Canadian West occurred during and shortly after Sifton's tenure.

The role of government promotion in influencing the rate of settlement during this period has been debated. It is recognized that a conjuncture of favorable circumstances contributed to western agricultural expansion in the 1890s, including the growing scarcity of free, arable land in the United States, a condition the Canadian government exploited in its advertising campaign. The slogan championed the existence of a pioneering opportunity on the Canadian Prairie at a time when the Plains frontier of the United States was closing. The phrase represents the final chapter in the early promotion and European American settlement of the Great Plains and has become the most notable example of Canadian Prairie boosterism.