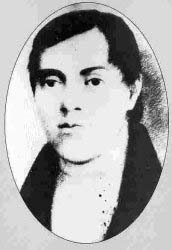 Cuthbert Grant is best known as the captain of the Plains Métis who clashed with the Selkirk settlers at the Seven Oaks Massacre (near present Winnipeg, Manitoba) on June 19, 1816. The Métis victory nearly destroyed the fledgling Red River Colony, which later became the province of Manitoba, and enshrined Grant as the founder of the Métis nation. This sense of Métis nationhood would play a role in the Red River Resistance of 1869–70 and the North-West Rebellion of 1885.

Cuthbert Grant was born in 1793 at Fort de la Riviére Tremblante (Saskatchewan) to Cuthbert Grant Sr., a North West Company (NWC) trader, and a Métis woman of French Cree ancestry. He was sent to Montreal to be educated. In 1810 he joined the NWC, returning to the Northwest in 1812 at a time when the Hudson's Bay Company (HBC) and the NWC were engaged in a fierce competition for furtrade supremacy in British North America. The NWC tried to use the Métis in their struggles against the hbc by instilling in them the idea that they were a nation with rights to the territory. The NWC also appointed Grant as "Captain-General of all the Half-Breeds" with the intention that he and his Métis kinsmen would destroy the Red River Colony, which was backed by the HBC. The Métis, for their part, needed little encouragement after the colony's governor prohibited the export of pemmican from the district and forbade the hunting of buffalo near the settlement.

The Seven Oaks Massacre began when the colony's governor attempted to stop Grant and his men from carting pemmican out of the country. In this battle Governor Robert Semple and twenty-one of his men were killed but only one of the Métis. This violence, which contributed to the eventual merger of the two fur-trading companies in 1821, vastly increased Grant's prestige among the Métis. For this reason the new HBC tried to use Grant as a means of controlling the Métis and winning them over to the settlement. In 1824 they offered Grant a large land grant at White Horse Plains (part of the Red River Colony) with the hope that he would settle the Métis there and prevent them from trading with the Americans. In 1828 the company also appointed Grant as "Warden of the Plains," paid him a large salary, and allowed him to trade in furs if he would prevent his kinsmen from doing the same.

Grant remained a respected leader and chief of the Métis buffalo hunt until the 1840s, when a younger generation of Métis openly defied his authority to trade furs illegally to the Americans on the upper Missouri. No longer effective, Grant was let go by the hbc, and the rest of his life was fairly uneventful. He died on July 15, 1854, after falling from his horse.