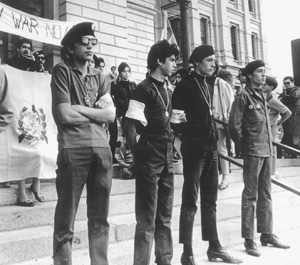 Corky Gonzales (under banner) speaks at war protest in front of the capitol, Denver, Colorado, 1970.

Rodolfo "Corky" Gonzales is best known for his contribution to the Chicano movement. Born in Denver, Colorado, on June 18, 1928, Gonzales became one the most dynamic and influential leaders of the Mexican American struggle for self-determination and cultural pride in the 1960s and 1970s.

The son of a migrant father from Chihuahua, Mexico, Gonzales grew up in a Denver barrio amid poverty, discrimination, and hard work. His mother died when he was two years old, leaving Gonzales, the youngest child, in the care of his father and seven siblings. Nicknamed "Corky" at a young age by one of his older brothers, Gonzales spent much of his youth working alongside family members in the sugar beet and potato fields of northern and southern Colorado.

Gonzales attended numerous public schools in the Denver area. In 1944, at age sixteen, he graduated from Denver's Manual High School. Gonzales completed one term at the University of Denver but found the costs of further attendance prohibitive. Nevertheless, he pursued knowledge, learning not only from his experiences and the many people he met but also from reading the likes of Federico García Lorca, Pablo Neruda, John Steinbeck, and Ernest Hemingway. Gonzales's intellectual and creative capacity is evident in his many writings— hundreds of speeches, letters, and editorials, two plays, and many poems. His widely read poem, "I Am Joaquín," first published in 1967, has become one of the major pieces of Chicano literature. Revealing the cultural and spiritual conflicts in the Chicano identity, the poem inspired Chicano pride and activism.

Gonzales developed a strong, charismatic presence early in life. He drew crowds as an amateur boxer and became one of the best fighters of the time. He won the National Amateur Athletic Union Bantamweight Championship in 1947, and until 1955 fought professionally in featherweight divisions, with seventy-five wins, nine losses, and one draw. In 1988 Gonzales was inducted into the Colorado Sports Hall of Fame, the first Latino to be so honored.

Gonzales's first foray into politics centered around the Democratic Party. He campaigned for Quigg Newton for Denver mayor in 1947, and as a district captain in Denver County he organized Latino support for the Democratic Party in the 1950s. In 1960 he led the Colorado "Viva Kennedy" campaign. Gonzales himself ran unsuccessfully for office, including a bid for Denver City Council in 1955, the Colorado House of Representatives in 1964, and mayor of Denver in 1967. In 1965 he was appointed director of Denver's War on Poverty.

Increasingly frustrated by partisan wrangling, Gonzales publicly resigned from the Democratic Party in 1967. He had begun to shift his focus to the Crusade for Justice, which he and other community activists founded in 1966. A grassroots, human-rights cultural center located in Denver, the Crusade for Justice became an important site for Chicano activism. Gonzales represented the organization throughout the nation, as he gave speeches, conducted forums, and otherwise inspired and organized Chicanos to action. Under his leadership, the Crusade for Justice hosted three annual National Chicano Youth Liberation conferences. More than 1,500 Chicano youths attended the first conference in 1969. They produced goals for the Chicano movement and introduced the concept of Aztlán in the document Espiritual de Aztlán. Gonzales purposely focused on the younger generation of Mexican Americans, finding them receptive to his major themes of Chicano nationalism, self-determination, and cultural and historical pride.

In 1970 Gonzales formed the Colorado La Raza Unida Party, a third-party political organization dedicated to the goals of the Chicano movement. At the party's first national convention in El Paso, Texas, in 1972, Gonzales vied unsuccessfully against Texas La Raza leader José Angel Gutiérrez for the national chairmanship. At issue in the campaign was Gonzales's emphasis on ethnic nationalism against Gutiérrez's political pragmatism.

While becoming a significant public leader of the Chicano movement, Gonzales remained dedicated to his family in Colorado. In 2001 he celebrated more than fifty years of marriage to his wife, Geri Romero de Gonzales, with his eight children, eighteen grandchildren, and many great-grandchildren. Although slowed by a serious automobile accident in 1988 and heart surgery in 1989, Gonzales remains active and is working on his autobiography.

Vigil, Ernesto V. The Crusade for Justice: Chicano Militancy and the Government's War on Dissent. Madison: University of Wisconsin Press, 1999.