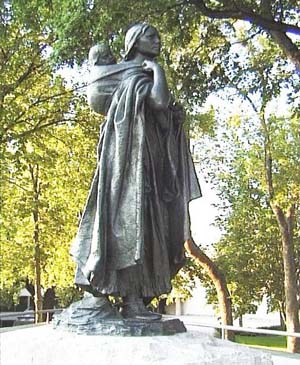 The only woman on Lewis and Clark's expedition, Sacagawea was a young Shoshone who had been captured by Hidatsa raiders near the three forks of the Missouri River about 1800. She married trader Toussaint Charbonneau sometime before 1804. A son, Jean Baptiste, called "Pomp" by Clark, was born to them in February of 1805. Together, the family traveled from the Mandan-Hidatsa villages in presentday North Dakota to the Pacific and back.

Sacagawea has been the object of considerable myth and misinformation; her contributions to the expedition have been both exaggerated and minimized. Clark thought more of her contributions than did Lewis, though one must consider here the eighteenth-century tendency to discount contributions of nonwhite peoples. In a letter to Charbonneau after the expedition, Clark wrote, "Your woman diserved a greater reward for her attention and services on that rout than we had in our power to give her." Lewis's view was more dismissive: "If she has enough to eat and a few trinkets I believe she would be perfectly content anywhere."

In fact, Sacagawea's contributions were real: she provided important geographical data to the party at various times, she helped as translator with certain tribes, she rescued important documents during a canoe mishap in May 1805, and, perhaps most important, she gave a friendlier face to the Corps of Discovery. Clark wrote that she "reconsiles all the Indians, as to our friendly intentions, a woman with a party of men is a token of peace."

Sacagawea died of a "putrid fever" in December 1812 near present-day Mobridge, South Dakota, at about age thirty-two. Jean Baptiste and Sacagawea's daughter, Lizette, lived with Clark at St. Louis for a time.