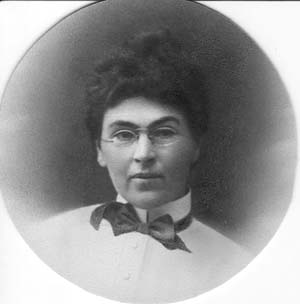 Kate Simpson Hayes, one of the earliest woman authors and journalists in western Canada, was born in Dalhousie, New Brunswick, in 1856 and died on January 15, 1945, in Victoria, British Columbia. Hayes arrived at Prince Albert in 1879. In the mid-1880s, after her marriage failed, she took her two young children and moved to the small Canadian Prairie town of Regina. There she met Nicholas Flood Davin, and their nine-year intimate relationship resulted in the birth of two children out of wedlock.

Following a brief period as proprietress of her own millinery shop, Hayes worked as librarian for the territorial legislature and wrote for the Regina Leader newspaper. Much of her work was written under the pseudonym "Mary Markwell." In 1889 she spent several months in North Dakota, reporting on fairs, harvest conditions, and fashion trends. Hayes also wrote plays and comedic sketches, which were performed in a number of prairie communities. Her first book, Prairie Pot-Pourri, a collection of poems, stories, and a children's play, was published in 1895. In 1900 Hayes moved to Winnipeg, where she edited the women's page of the Manitoba Free Press (later Winnipeg Free Press) until 1906. She then traveled to Britain, where she worked for the Canadian Pacific Railway, promoting the emigration of women to western Canada. Kate Hayes was a charter member of the Canadian Women's Press Club in 1904 and served as club president in 1906-7. Her newspaper columns reveal her conservative social views, including her opposition to women's suffrage. Hayes contributed to the Manitoba Free Press until 1909, and during 1910-11 was women's editor of the Ottawa Free Press. For the remainder of her life Kate Hayes continued to write, supporting herself with her pen until well into her senior years.