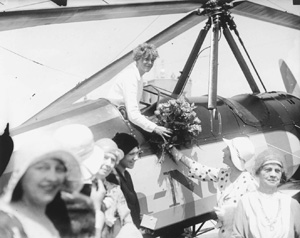 Amelia Earhart was a woman who was ahead of her time. She was a pioneer aviator, a pacifist, and a feminist who, although daubed with grease, was unmistakably a lady. Earhart was born July 24, 1897, in Atchison, Kansas. On both sides, her family had been American since before the Revolution. Her maternal grandfather was a judge who was upright, conventional, and moderately wealthy. Her paternal grandfather was a minister, whose saintliness was matched only by his poverty. The judge's gentle, lovable daughter married the minister's brilliant, irresponsible son and the results were Amelia Earhart and her younger sister, Muriel. The girls initially enjoyed an idyllic childhood, spending the school year with their grandparents in Atchison and the summers with their parents in Kansas City. However, when alcoholism caught up with her father it all came apart, and the family drifted around the Midwest, living in poor circumstances. Amelia graduated from high school in Chicago in 1916.

A stint in a Canadian military hospital during World War I left her a confirmed pacifist and gave her a first glimpse of aviation activity, but she did not became involved herself until a few years later when the family moved to California. Her first flight was in 1920, and in 1921 she gained her license from the National Aeronautics Association. The next year she set the women's altitude record (14,000 feet).

In 1928, while working as a social worker in Boston, Amelia had an opportunity that brought her worldwide recognition. A transatlantic flight had been arranged, and the sponsor wanted a woman aboard who not only could fly but also could represent the United States with grace and honor. Amelia was a natural for the position. One of those who interviewed her was George Palmer Putnam of the publishing firm G. P. Putnam and Sons. The success of the flight brought Amelia headlines. Although she had merely been a passenger, she was officially the first woman to fly across the Atlantic.

Taking advantage of her widespread fame, Putnam (whom Amelia married on February 7, 1931) scheduled Earhart for a full program of lectures. In addition, she wrote articles and books to help support her mother and sister. In her works Amelia stressed two themes: first, she advocated aviation as a means of transportation and promoted the unlimited possibilities for flight in general; and second, as a pioneer for women's rights, she strove for the day when women would have the same educational and career opportunities as men.

Earhart loved the beauty of flight and flew whenever she could. Although she set several speed records for women pilots, and in 1931 held the world altitude record for autogyros at 18,451 feet, her specialty was long-range routes, which she saw as heralds of regular commercial routes. On May 20 and 21, 1932, she made her solo transatlantic flight from Newfoundland to Ireland. Early in 1935 she made the first solo nonstop flight from Honolulu to Oakland; later the same year she established another record from Mexico City to New York City.

In 1935 she became a.liated with Purdue University as an aviation adviser and as a counselor for women students. Purdue provided her with a Lockheed Electra as a flying laboratory. That same year, Amelia decided that she had one more flight in her system. She wanted to fly around the world as close to the equator as possible. Her first attempt, from east to west, ended in March 1937 when her plane ground-looped as she was taking off from Honolulu for Howland Island in the Pacific. She had to start over again after her aircraft was repaired. For various reasons she changed her route to fly from west to east. On this ill-fated flight, she sent back detailed accounts of each leg. She appeared to be doing well, but on the next to the last leg, from New Guinea to Howland Island, Amelia and her navigator, Fred Noonan, disappeared on July 2, 1937. On July 17 they were declared lost at sea.

There the clear stream of Amelia Earhart's life was lost in a swamp of myth and speculation. Figuring out what happened to her has become a sort of cottage industry, with explanations running from the fairly plausible to the frankly incredible. The search to find her plane and body continues, but no one can yet say with any degree of certainty where and why Amelia crashed. The real tragedy was the loss of Amelia Earhart the person: a vivid, likable, and interesting woman who made an invaluable contribution to aviation and women's rights and in the process made herself one of the best-known and best-liked personalities of her time.