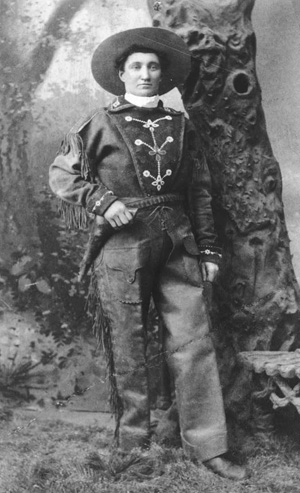 Martha Canary (Calamity Jane), the famous frontierswoman, was born in 1856 in the vicinity of Princeton, Missouri, the eldest daughter of Robert and Charlotte Canary. In 1864 the Canary family joined the gold rush to Montana. Martha's parents died in the West a few years later, and Martha was reported alone in the 1869 census of Piedmont, Wyoming. She evidently became a prostitute, traveling between the bustling new Union Pacific Railroad towns and Wyoming's military posts. At some point she gained her famous nickname, "Calamity Jane," probably based on her propensity for raising a ruckus or because of her calamitous origins. The first published notice of Martha bearing her famous nickname appeared in 1875, when in the capacity of camp follower she accompanied the "Jenney expedition" from Fort Laramie to the Black Hills of Dakota Territory.

Martha's local notoriety increased in 1876 when, again as camp follower, she accompanied Gen. George Crook's command against the Sioux; for the remainder of her life, Martha claimed to have scouted for Crook. Shortly afterward she joined James Butler "Wild Bill" Hickok's wagon train headed for the Black Hills. Though their acquaintance lasted only a few weeks before Hickok was murdered in Deadwood on August 2, 1876, the names of Calamity Jane and Wild Bill Hickok would be joined in folklore.

Martha gained national prominence in 1877 after Horatio N. Maguire penned a colorful account of her in his promotional booklet The Black Hills and American Wonderland. His description was appropriated by dime-novelist Edward Wheeler for his new "Deadwood Dick" series, instantly transforming "Calamity Jane" into a nationally known heroine.

Her life was less glamorous than the dimenovel descriptions allowed. She worked as a dance-hall girl, waitress, and laundress, living with a series of male companions she identified as husbands. Following early experiences, she migrated to newly constructed railroad towns, mining camps, and military posts. She followed the Northern Pacific Railroad as it built westward through Montana in the early 1880s, then migrated to the Wyoming region as railroad extensions were built into interior regions. For several years she was the companion of William Steers, a physically abusive railroad brakeman. They were legally married several months after the birth of their daughter, Jessie, in 1887.

In 1895 Calamity Jane made a celebrated return to Deadwood, selling photographs of herself in frontier costume. Publicity led to a contract to tour eastern cities with Kohl and Middleton's dime museums in 1896. Her somewhat fictionalized autobiography, Life and Adventures of Calamity Jane, By Herself, was published during this tour for sale to audiences. Afterward Martha returned to Montana, making a subsistence living from sales of her autobiography and photographs and from performing menial labor. A generous woman, she attended people in illness and shared her meager proceeds; an alcoholic, she never held lasting jobs nor accumulated property or wealth.

Exhibiting increasing signs of serious illness, Martha once again received national publicity in 1901 when author Josephine Brake offered her the opportunity to live with her in New York. Upon her arrival there, Calamity Jane was exhibited with Colonel Frederic T. Cummins's "Indian Congress" at the Pan- American Exposition in Buffalo. Unhappy and feeling used, Martha returned to Montana, where her drunken celebrations made her less and less welcome. In December 1902 she departed for the Black Hills, where she died in Terry, near Deadwood, on August 1, 1903. She was buried in the vicinity of Hickok.