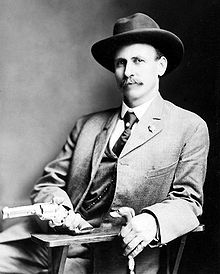 Cowboy, Pinkerton detective, and western author, Charles Angelo Siringo was the first authentic cowboy autobiographer. His books helped popularize the romantic image of the American cowboy. Born on February 7, 1855, in Matagorda County, Texas, Siringo was introduced to the life of a cowboy at a young age. By the age of eleven he was working on Texas ranches, and during the 1870s he drove cattle north on the Chisholm Trail to the Kansas cattle towns of Abilene and Dodge City. During the late 1870s he helped establish the LX Ranch, a large cattle-ranching operation in the Texas Panhandle. While in West Texas, Siringo reportedly met Billy the Kid, and later he led a posse in search of the outlaw. In 1884 Siringo left the LX Ranch and moved to Caldwell, Kansas, where he opened a general merchandise store. With more time on his hands, he began writing about his experiences as a cowboy. Published in 1885, A Texas Cowboy; or, Fifteen Years on the Hurricane Deck of a Spanish Pony was the first cowboy autobiography and a best-seller. Historian J. Frank Dobie called it the most widely read book on cowboy life. In 1886 Siringo went to work for the Pinkerton Detective Agency. For the next twenty-two years he lived an adventurous life, chasing criminals across the West, infiltrating outlaw gangs and labor unions, and serving as a bodyguard for high-profile clients such as "Big Bill" Haywood.

Siringo resigned from the Pinkerton Agency in 1907, returned to his ranch near Santa Fe, New Mexico, and began writing books about his career as a western cowboy and detective. A Cowboy Detective (1912), his second book, was originally titled "Pinkerton's Cowboy Detective." Siringo dropped the word Pinkerton from the title and throughout the text after the agency blocked its publication through legal action. Angered by the Pinkerton's legal attack, Siringo lashed out at the company in his third book, Two Evil Isms, Pinkertonism and Anarchism (1915). The book was highly critical of methods used by the Pinkertons, accusing the agency of buying off policemen and politicians, bribing juries, intimidating witnesses, and murder. Once again the agency went to court to block the sale and publication of the book. Frustrated with such legal wrangling, Siringo briefly retired from writing in 1916 and took an assignment as a New Mexico Ranger.

Two years of chasing cattle rustlers and horse thieves across the Southwest, however, was enough to convince the aging Siringo to return to writing. In 1919 he published A Lone Star Cowboy, and the following year his History of Billy the Kid appeared. In 1922 failing health and financial problems forced Siringo to leave his Santa Fe ranch and move to California, where his children lived. Siringo eventually landed in Hollywood, where he had several small roles in Western movies and served as a consultant for Western actor William S. Hart. Siringo's final book, Riata and Spurs, was published in 1927.

Siringo had a difficult married life. His first wife died in 1889, leaving him with a young daughter to raise. A second marriage in 1893 to Lillie Thomas ended in divorce after three years (the couple had a son). Two other marriages each lasted only a few months. Siringo died on October 28, 1928, in Altadena, California.