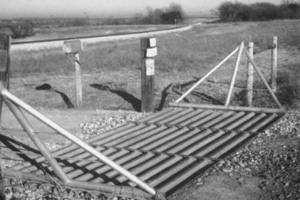 A cattle guard is a device of folk technology (although many today are commercially manufactured) that allows automotive tra.c to move freely while hindering the passage of livestock. Its essential components are a pit, usually constructed of concrete and a foot or more deep, placed across a roadway at the point where it intersects with a fence; a grid of metal bars, pipe or of railroad rails, fastened in parallel fashion across the pit and spaced about three to five inches apart; and a wing on either side that angles up from the edge of the grid to the fence. Hoofed livestock, instinctively wary about insecure footing, are generally deterred by this barrier. Some ranchers have created effective cattle guards by placing fresh cowhides, sheets of tin, or an arrangement of old tires in a gateway.

The cattle guard had its origin in the Great Plains, being independently developed in a number of locations from Texas to North Dakota in the decade beginning around 1905 in response to the introduction of a growing number of automobiles in fenced range country. The immediate progenitor of the automotive cattle guard is the railroad cattle guard, an American innovation dating back at least to 1836. The ultimate progenitor of the cattle guard is the flat stone stile of Cornwall, England, where grids of granite bars placed over pits in public footpaths have been in existence for more than 2,000 years.

Today, cattle guards are found in all fifty states and on every continent. The term "cattle guard" is generally used in the Southern Plains, while from Nebraska north the terms "auto gate" or "car gate" are common. In the Prairie Provinces, a cattle guard usually refers to the railroad variety, while those on highways are called "Texas gates."