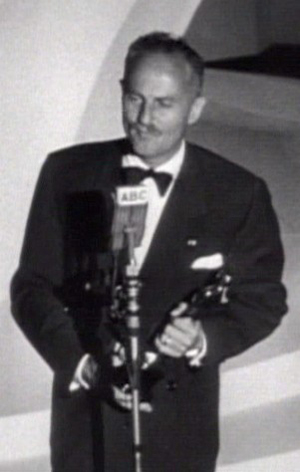 Darryl Francis Zanuck was born on September 5, 1902, in Wahoo, Nebraska. His father, Frank Zanuck, and his mother, Louise Torpin Zanuck, were an unhappy couple. After the death of an older brother in an accident Darryl became an only child, and when his parents divorced he lived with his mother, dividing the year between Glendale, California, and Oakdale, Nebraska, the home of his maternal grandparents. Though this cannot be verified, Zanuck claimed to have first thought of working in film at the age of seven or eight, when he was hired as a movie extra. Restless and energetic, the diminutive young man lied about his age and at fifteen enlisted in the army. Private Zanuck saw action on the French and Belgian fronts during World War I, and this wartime experience left a strong imprint on his life, later recalled in a number of films, most notably, The Longest Day (1962).

After his discharge he worked in a series of unsatisfying jobs. With only an eighthgrade education, he nevertheless persisted as a writer. He finally succeeded in placing some of his short silent scenarios at Universal and the FBO Company (a forerunner of RKO). Often generously borrowing from other film or stage sources, the young writer, barely nineteen, wrote quickly, drawing his inspiration from tabloids and pulp fiction. Hired in 1924 by growth-oriented Warner Bros., his big break came when his wildly successful scenarios made Rin Tin Tin the studio's biggest draw.

Soon an almost atavistic energy and an intuitive grasp of all aspects of filmmaking, absorbed at the studio, caused Zanuck to outgrow his screenwriting limitations (he was notoriously weak with dialogue), and with a string of hits credited to his three screen names, he rose quickly to become Warner's head of production before he was thirty. As production chief he practically invented the genres of the gangster film, the biopic, and the backstage musical. He used his love of tabloid and pulp to turn the American cinema (which was reaching for a new direction with the advent of sound) away from the British-derived gentility of rival producers Irving Thalberg and David Selznick and toward a distinctive but contradictory American world of urban crime and small-town nostalgia. Before he left the studio in a dispute with its difficult owners he had signed a number of memorable stars (James Cagney, Edward G. Robinson, and Barbara Stanwyck among them) and produced a number of legendary films such as The Jazz Singer (1927), The Public Enemy (1931), and Forty-Second Street (1933).

In 1933 Zanuck joined forces with mogul Joseph Schenck to found Twentieth Century Pictures. Two years and more than a dozen hit films later, Zanuck merged his company with Fox Films to form Twentieth Century Fox. From 1935 to 1956, under the title vice president in charge of production, he ruled the studio uninterrupted (except for military service in World War II) and virtually unquestioned. He supervised every detail of every film, creating careers for Tyrone Power, Sonja Henie, Marilyn Monroe, and Betty Grable, and he took several established figures (notably, Shirley Temple and Alice Faye) to new heights of popularity. His studio program was divided between controversial prestige films like The Grapes of Wrath (1940) and The Snake Pit (1948) and escapist musicals and films of small-town nostalgia. Although Zanuck almost never returned to Nebraska, the imprint of small-town Plains life was always a strong presence in his vision of the cinema. During the studio era, more than a quarter of his studio's films were set in small towns at the turn of the century, giving moviegoers a highly nostalgic, almost regressive vision of a United States that was becoming increasingly urban and populated by non-wasp immigrants.

Leaving Fox in 1956, Zanuck became an independent producer, operating largely out of Paris. But after five failed productions, it appeared as if Zanuck, the recipient of a record three Thalberg Awards and three Oscars for best picture (How Green Was My Valley, 1941; Gentleman's Agreement, 1947; and All about Eve, 1950), had lost his touch. He surprised everyone and made a stunning comeback with his blockbuster version of the D day operation The Longest Day. In 1962, with his old studio nearly destroyed by poor management and the costly fiasco of Cleopatra (1963), Zanuck ousted the head of the corporation, Spyros Skouras. While he operated from the New York office, he placed his twenty-eight-yearold son, Richard, in charge of the studio. With hits like The Sound of Music (1965) and The Planet of the Apes (1967) series, it appeared as if Zanuck could go on forever. But a changed set of power relations in the motion picture business and a string of costly box office bombs made in an attempt to imitate The Sound of Music resulted in Zanuck's summary dismissal in 1971.

Impaired by Alzheimer's disease, Zanuck was taken back by his estranged wife, Virginia, whom he had left in 1956, and he died quietly out of the limelight on December 22, 1979. At his funeral Orson Welles recalled him as the most gifted Hollywood producer of all, one whose greatest assets were his personal loyalty and his strength in story construction. Few people were able to see past his outlandish mogul behavior (oversized cigars, swinging a polo mallet, an endless string of malapropisms) to observe that Zanuck was one of the industry's most creative and courageous giants. Even though he left the world of the Plains at a young age, of all the old-time producers his voice was the most genuinely American from the inside, a perspective that suffuses almost every film he made. He brought to the American cinema a populist's sense of fair play, a no-nonsense patriotism, a love of simple stories, and a dose of social criticism.