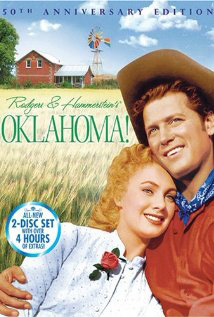 Oklahoma! (directed by Fred Zinneman) was one of the most popular films of the 1950s. The musical, written by Richard Rodgers and Oscar Hammerstein, was based on Lynn Riggs's Broadway play, Green Grow the Lilacs. The musical was adapted into a movie in 1955.

The story takes place in Indian Territory (later Oklahoma) during the early 1900s and concerns the rivalry between a cowboy, Curly, and a ranch hand, Jud Frye, for the love of an Oklahoma farm girl, Laurie Williams. While the 1943 Broadway musical was a success for Rodgers and Hammerstein, the film version, starring Shirley Jones (Laurie), Gordon Mac- Rae (Curly), and Rod Steiger (Jud Frye), made Oklahoma! an overnight sensation. The film version also included performances by Gloria Grahame, Eddie Albert, and Charlotte Greenwood. Revolutionary for its time, the musical incorporated plot, music, and dance, with choreography by Agnes De Mille. The score of Oklahoma! also proved highly popular, including songs such as "Oh, What a Beautiful Mornin'," "The Surrey with the Fringe on Top," "I Can't Say No," and "People Will Say We're in Love." The title song, "Oklahoma," became the official state song. Although the musical presented an idealized story of life on the Plains frontier, the film version was actually shot in Arizona. The film won Academy Awards for best score, best editing, and best sound as well as nominations for best film and cinematography. In 1955 the New York Film Critics Circle named Oklahoma! the year's best film.

Previous: Oil Field Films | Contents | Next: The Plow That Broke the Plains