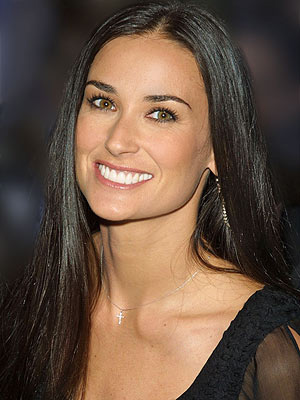 Like her contemporary in movie stardom, Brad Pitt, Demi Moore was born in the Great Plains but quickly moved on. She was born Demi Guymes on November 11, 1962, in Roswell, New Mexico. She had a tough upbringing: her mother and father married and divorced twice before separating permanently when Demi was fifteen. By her estimation, she had lived in more than thirty different towns by the time she was twelve. Geographic stability came only in 1975, when she settled in West Hollywood with her mother. At the age of sixteen she began a career as a model, and by the time she was twenty she was acting in movies and the television soap opera General Hospital.

Her rise to celebrity status came with her all-too- true-to-life role as a cocaine addict in St. Elmo's Fire (1985). Moore quickly overcame her own addiction and with great ambition and energy went on to become one of Hollywood's most bankable stars in the 1990s. Leading roles in Ghost (1990), A Few Good Men (1992), and Indecent Proposal (1993) proved that Moore could indeed act. Posing nude for a Vanity Fair cover in 1991 while seven months pregnant only added to her stardom. Her star has, perhaps, temporarily dimmed in recent years because of a series of unfortunate choices of film roles (not least, Striptease in 1996).

An intelligent woman with strong ideas of her own (she has been labeled "difficult" because of this), Moore was initially married to rock musician Freddy Moore and was later in a long relationship with Emilio Estevez. In 1987 she married actor Bruce Willis, with whom she has three children. They divorced in 1998.