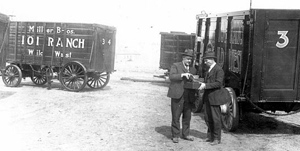 The Miller brothers, owners of the 101 Ranch near Ponca City, Oklahoma, created a worldrenowned Wild West show. Col. George Washington Miller founded the 101 Ranch in 1893, and upon his death the ranch passed into the hands of his three sons, Zack, Joe, and George. While Zack focused on the ranch's oil development and George on the ranch's finances, Joe developed the 101 Real Wild West Show and began touring in 1906. The production featured acts by Lucile Mulhall, Buffalo Bill, Geronimo, and Bill Picket. The show helped launch the careers of Tom Mix and Buck Jones.

A number of early Hollywood Westerns were shot on location at the ranch and featured many of the ranch cowboys as stars. Among these was the 1908 production A Round-Up in Oklahoma, directed by Oklahoma federal marshal William Tilghman, himself a participant in numerous real adventures. In 1924 Paramount used the ranch to film North of 36 (1924), based on the Emerson Hough novel of the same name. Other films shot in their entirety or in part on the 101 Ranch were Trail Dust (1924), a tale of the pioneers of the 1870s, and the ten-part series, Wild West (1925), a story about a circus and medicine show traveling through Oklahoma in the 1890s and starring dozens of 101 Ranch performers.

The Miller brothers established their own motion picture department in 1911 under the direction of J. B. Kent, a pioneer Oklahoma filmmaker. Their company produced films such as Setting up the Strip, On with the Show, and The Cherokee Strip. Some of the movies were shot on the 101 Ranch, but many others were filmed on sound lots in Los Angeles, in part because the weather was better there. In addition to their own work, the Miller brothers' ranch and show casts starred in several other Westerns, including War on the Plains (1912).

In 1924 the Miller brothers purchased the Walter L. Main Circus and combined the two shows. With exotic animals like buffalo, tigers, bears, and alligators, the show became a sensation in the 1920s, and the 101 Ranch hosted famous guests like John D. Rockefeller, Gen. John J. Pershing, and Presidents Theodore Roosevelt and Warren Harding. With the deaths of his brothers, Zack assumed control of the production in the late 1920s, but the Great Depression hit the show and the ranch hard. In 1931 a series of lawsuits were filed against Miller, one patron asking for $80,000 in damages because of personal injury sustained during a show. Poor attendance, debt, more lawsuits, and high traveling expenses forced Miller to sell the show in 1932, and, after a failed attempt by Al Capone to buy the 101 Ranch, the federal government purchased the land in 1937. Zack Miller moved to Texas, where he died in 1952.

Wallis, Michael. The Real Wild West: The 101 Ranch and the Creation of the American West. New York: St. Martin's Press, 1999.