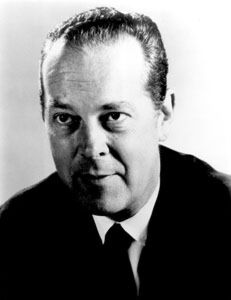 Delbert Mann, Oscar-winning motion picture and television director, was born in Lawrence, Kansas, on January 30, 1920. He moved to Nashville, Tennessee, as a young boy and graduated from Vanderbilt University in 1941. After serving as a bomber pilot during World War II he earned a master of fine arts degree from Yale's Department of Drama. In 1949 he was invited by Fred Coe, a producer at NBC Television and an old friend, to go to New York and direct live television drama. Among the many productions he directed were The Petrified Forest (1955), with Humphrey Bogart and Lauren Bacall, and Marty (1953), with Rod Steiger and Nancy Marchand. Marty was so successful as a television drama that Mann was invited to Hollywood to direct the feature film with Ernest Borgnine and Betsy Blair. The film won Academy Awards in 1955 for best picture, best director, and best actor (for Borgnine). Mann directed many other Hollywood films, including The Dark at the Top of the Stairs (1960), The Outsider (1961), and That Touch of Mink (1962).

From the late 1960s through 1994 he directed several television films, including David Copperfield, Jane Eyre, The Man without a Country, All Quiet on the Western Front, All the Way Home, and, in 1994 at the age of seventy-four, Lily in Winter. Typical of the art that was live television drama, the hallmarks of Mann's style lie in character development and realistic drama with an interest in rendering the lives of normal everyday people. The papers of Delbert Mann, from 1947 to 1994, are preserved in the Special Collections Library of Vanderbilt University, Nashville, Tennessee. They consist primarily of the materials generated by Mann's television and motion picture productions, including production papers, scripts and script reports, photographs, videotapes, and scrapbooks.

Mann, Delbert. Looking Back . . . at Live Television and Other Matters. Los Angeles: Directors Guild of America, 1998.