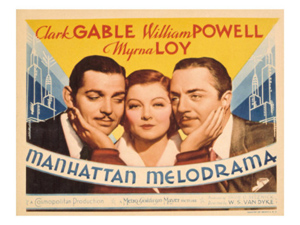 Myrna Loy, Hollywood's top female box office attraction in the mid-1930s, was born on August 2, 1905, on a sheep and wheat ranch near Raidersburg, Montana, where the Rocky Mountains meet the Great Plains. She grew up in nearby Helena in comfortable circumstances, just up the street from another future Hollywood star, Gary Cooper. Her father was a member of the Montana legislature, and early on Myrna developed her own strong political conscience. When her father died in the 1918 flu epidemic, her mother moved the family to Los Angeles, settling in Culver City, near Hollywood.

Long interested in theater and dance, Myrna started doing screen tests when she was eighteen. She landed bit roles in The Ten Commandments (1923) and Ben Hur (1925) before being typecast as a mysterious vamp in numerous films over the next ten years. Her casting opposite William Powell in Manhattan Melodrama in 1934 shattered this stereotype, and in subsequent films, thirteen of them with Powell, she reinvented herself as a witty and beautiful heroine, the model of the "perfect wife." The public loved the image, and in 1936 she was crowned "Queen of the Movies" in a poll, alongside the anointed "King," Clark Gable.

During World War II Loy put her film career on hold and channeled her energies into the Red Cross. She continued her political activism after the war as U.S. representative to unesco and as campaigner for John F. Kennedy and Eugene McCarthy in their runs for the presidency. She continued to find time for movies, most notably, The Best Years of Our Lives (1946).

Loy was never nominated for an Oscar, but at the 1991 ceremony she was presented with an honorary Academy Award. That same year the Myrna Loy Center opened in Helena with a mission to bring the arts to the citizens of Montana. Myrna Loy died in New York on December 14, 1993.