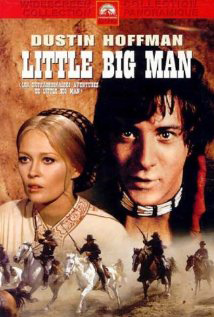 Little Big Man, released in 1970 and directed by Arthur Penn, is based on a novel of the same title (1964) by Thomas Berger. Berger and Calder Willingham wrote the screenplay. The film, shot on location in Montana and Canada, is a revisionist history of the mythic Old West, reflecting the social turmoil of the late 1960s.

The central character, Jack Crabb (Dustin Hoffman), is nearly 120 years old and in a home, where he relates his life story to a young writer. After their parents are killed by Native Americans on the way west, Jack and his sister are taken into a Cheyenne village. His sister escapes, but Jack is raised Cheyenne, in particular by Old Lodge Skins (Dan George).

The story is braided with characters who move in and out of the narrative as Jack ages. Later "rescued" from captivity, Crabb is caught between the worlds of the Cheyennes and European Americans. He moves through life as a gunfighter, a failed store clerk, a muleskinner, a drunkard, and a military scout, but he always moves back to the Cheyennes in order to center his life. The story is told with hyperbole, as a tall tale would be, but with deft humor and irony.

The entire film is a classic retelling of every Western ever written or made. The segments in the European American world are often the most humorous. Jack's religious education is overseen by a missionary and his lusty wife, who later reappears as a saloon prostitute. He assists a snake oil salesman and is tarred and feathered. His tutelage as a gunfighter is overseen by his "manly" sister, Caroline, and Wild Bill Hickok. His stint as an inept businessman includes his marriage to an illtempered immigrant woman, who henpecks him. As a drunkard, he ends up becoming a muleskinner and scout for George Armstrong Custer.

Jack's movement in and out of the Native American world is also humorous, but the Cheyennes are presented as victims. Jack is present at the Sand Creek Massacre, after which he takes a Cheyenne wife, only to see her, her sisters, and his child killed by the Seventh Cavalry on the Washita River. He lives to fight in the Battle of Greasy Grass (Little Big Horn), where a childhood rival rescues him from being killed.

The portrayals of the Old West and Native Americans are exaggerated in every way. The film marks the beginning, however, of showing Native Americans as close to nature, spiritual, and victims of the white man. Little Big Man was among the first films that made an effort to be ethnographically accurate in its Native American segments. It may also be the first portrayal of Custer as vainglorious and, by the time of the Washita River massacre and Little Big Horn, a raving lunatic. Little Big Man reflects the growing resistance to the Vietnam conflict but also incorporates other themes of the day, including more open sexuality, an exposure of religious hypocrisy, and an awareness of environmental issues.