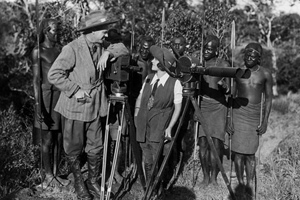 Photographers, explorers, naturalists, authors, and entrepreneurs, Martin and Osa Johnson captured and presented tens of thousands of images in their twenty-one films, eighteen books, hundreds of magazine articles, and many vaudeville presentations across America. How these natives of southeastern Kansas–Martin was born in Rockford, Illinois, on October 9, 1884, but grew up in Independence, and Osa Leighty was born on March 19, 1894, in nearby Chanute–came to become celebrated world travelers is a fascinating story.

The Kansas Plains might seem an unlikely stimulus for risk taking, but in 1906 twentytwo- year-old Martin left Independence to travel the South Seas with Jack London. Upon his return to Independence he presented a travelogue of his adventures that attracted the admiration of the equally adventurous sixteen- year-old Osa. They eloped in 1910 and began twenty-seven years of adventure and exploration, documenting their trips to the New Hebrides in the South Seas, Borneo, and Kenya in theatrical feature films like Among the Cannibal Isles of the South Pacific (1918), Simba (1928), and Congorilla (1932). The Johnsons' efforts on behalf of animal preservation, night photography, aerial photography, and camera safaris have influenced later generations of naturalists and photographers. It says a lot about the Johnsons that upon arriving in Africa they planted Kansas sunflowers on the mountain slopes. After Martin's death in a plane crash near Salt Lake City on January 12, 1937, Osa wrote the autobiographical I Married Adventure in 1940. She died in New York City on January 7, 1953. The Martin and Osa Johnson Safari Museum in Chanute, Kansas, houses the Johnsons' maps, Native artifacts, personal memorabilia, and dozens of films, which can be viewed in a thirty-seat theater.