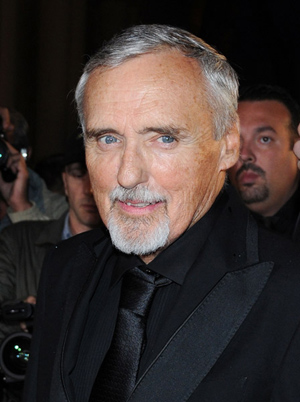 Dennis Hopper's childhood (he was born on May 17, 1936, in Dodge City, Kansas) hardly foreshadowed the alienated, counterculture hero he would come to be known as in films of the 1960s and 1970s. In his early teens a family relocation to California made possible his pursuit of a film career. After high school graduation Hopper was awarded a scholarship to San Diego's Old Globe Theatre, where he appeared in a number of Shakespearean roles.

In the 1950s Warner Bros. cast him in a series of supporting roles with James Dean (Rebel without a Cause [1955]; Giant [1956]). Dean's acting style greatly influenced Hopper, who would later move to New York in order to study method acting at the Actors Studio. He also began a new career as a photographer, a move specifically calculated to teach him the art of filmmaking and a choice that would bring him artistic recognition.

In 1969 Hopper directed and costarred in the acclaimed Easy Rider, filmed from a script he had coauthored with Peter Fonda. Easy Rider won the prize for best film by a new director at the Cannes Film Festival. Impressed by the low-budget, high-grossing film, Hollywood gave Hopper another chance to direct. The opportunity was squandered on The Last Movie (1971), an unsuccessful film that cost Hopper his studio credibility. He continued to work in films, including Apocalypse Now (1979), but by 1984 Hopper's history of substance abuse climaxed with his commitment to a psychiatric hospital.

Two years later he began another comeback. In 1986 Hopper won an Academy Award nomination for his role in Hoosiers and a best supporting actor award from the National Society of Film Critics for his malevolent role in Blue Velvet. A year later he directed Colors, his first feature film in sixteen years. Hopper continues to work regularly as a creative artist, most notably, as a character actor.