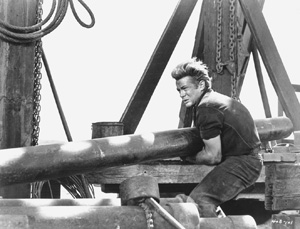 Edna Ferber's best-selling novel Giant (1952) provides the basis for this 1956 film set in Texas and directed by George Stevens. Stevens, who won an Academy Award for best director for Giant, was especially lauded for his ability to juxtapose the vast Texas landscape with the narrow-mindedness of the people who lived there. The film's star-studded cast includes Elizabeth Taylor, Rock Hudson, and James Dean. Giant was Dean's last film before his fatal car accident, which occurred two weeks after shooting the final scene.

Ferber based the opulent lifestyle portrayed by Bick and Leslie Benedict (Hudson and Taylor) on wealthy Texas ranch owners and oil developers like Bob Kleberg and Glenn Mc- Carthy, who received significant media attention in the 1940s and 1950s, including representation on the cover of Time magazine. Giant contrasts a materialistic life of lavish dinners, fine clothes, and automobiles with the exploitation of Mexican Americans, whose labor was a significant commodity in the Texas economy. Mexican Americans were still being referred to as "wetbacks" in the U.S. government documents and academic reports that Ferber used as sources in the late 1940s. In addition to the politics of materialism, the film addresses racial and class prejudices directly when the Benedicts' son (played by Dennis Hopper) marries a Mexican woman. The novel and film caused considerable controversy. Articles in newspapers and magazines, including the Dallas Morning News and the Houston Press, protested what they considered a stereotypical and exaggerated representation of the Texas culture.

Previous: Fonda, Henry | Contents | Next: The Grapes of Wrath