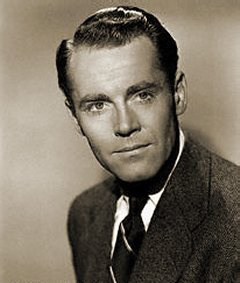 Henry Jaynes Fonda, one of America's most beloved screen actors, won the admiration of film fans around the world with an unassuming acting style that was engagingly forthright and sincere. From his Hollywood debut in The Farmer Takes a Wife (1935) to his Oscarwinning performance in On Golden Pond (1981), Fonda projected a clear-eyed integrity that compelled him to seek the truth and stand up for the little guy.

Born in Grand Island, Nebraska, on May 16, 1906, Fonda moved with his family to Omaha when he was six months old. Intent on a career in journalism, he enrolled at the University of Minnesota. He dropped out after two years and returned to Omaha and a job as an office boy. In 1925 a friend of the family–the mother of then one-year-old Marlon Brando –asked him to act in an amateur production at the Omaha Community Playhouse. Entranced by the theater, Fonda quit his office job to work with the company for three years.

In 1928 Fonda headed to New York to seek his fortune as a professional actor. After several minor Broadway roles, he achieved stardom in The Farmer Takes a Wife, his first film role. As a young Hollywood leading man, Fonda at first played opposite established female stars such as Bette Davis in Jezebel (1938). The defining moment for Fonda's career came in director John Ford's The Young Mr. Lincoln (1939), a role that allowed the actor's aura of midwestern honesty and thoughtful compassion to shine. Other now classic films capitalizing on Fonda's quiet heroism include The Grapes of Wrath (1940),The Ox-Bow Incident (1943), My Darling Clementine (1946), Twelve Angry Men (1957), and Fail Safe (1964).

Although his international celebrity was a result of his status as a Hollywood star, Fonda's true love was theater, and in 1948 he returned to Broadway for three long-running hit plays, Mr. Roberts (1948), Point of No Return (1951), and The Caine Mutiny Court-Martial (1954). Fonda might never have appeared in movies again had it not been for John Ford, who insisted that he reprise his role of Mr. Roberts for the 1955 film adaptation. Thereafter, Fonda shuttled back and forth between New York and Los Angeles. Among his last triumphs were the one-man Broadway show Clarence Darrow (1974) and his cutting-against-the-grain villain in film director Sergio Leone's epic Once Upon a Time in the West (1969).

In 1981, when he was sick and dying, Fonda agreed to film the adaptation of On Golden Pond, which costarred and was produced by his daughter Jane. Teamed with Katharine Hepburn in what proved to be his final role, Fonda was hailed by the critics, the public, and the Academy of Motion Picture Arts and Sciences, which awarded him a best actor Oscar. Fonda also is the father of actor-producer Peter Fonda. Henry Fonda, who was granted a Life Achievement Award by the American Film Institute in 1978, died in Los Angeles on August 12, 1982.