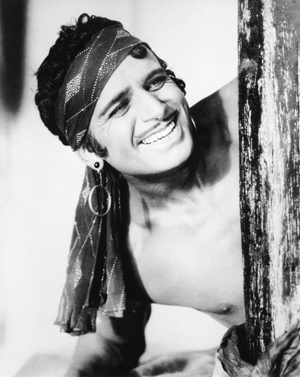 Douglas Fairbanks in The Thief of Bagdad (1924)

A major force in the motion picture industry in the 1910s and 1920s, Douglas Fairbanks is best remembered for his swashbuckling costume pictures. He was born Douglas Elton Ulman on May 23, 1883, in Denver, Colorado, the last of three children to Ella and H. Charles Ulman. After his father deserted the family, he was raised by his mother, who reassumed the surname of her first husband, Fairbanks. The family relocated to New York City in 1900, and young Doug began appearing in a succession of light comedies on Broadway. By 1914 he had established himself as a leading performer in satiric comedies like The Show Shop and The New Henrietta.

Lured to Hollywood in 1915, his buoyant optimism and physical agility transferred easily to the motion picture screen. In just his first year at Triangle.Fine Arts, the spectacular success of open-air adventures like The Lamb (1915) and The Good Bad Man (1916) and farcical comedies like His Picture in the Papers and American Aristocracy (1916) encouraged him to form his own production company, the Douglas Fairbanks Film Corporation. Two years later he joined Mary Pickford (soon to become his second wife), Charles Chaplin, and D. W. Griffith at United Artists, through which he released his legendary swashbuckling costume pictures, including The Mask of Zorro (1920), The Three Musketeers (1921), Robin Hood (1922), The Thief of Bagdad (1924), and The Black Pirate (1926). After the box office failure of his first talkie, The Taming of the Shrew (1929), costarring Mary Pickford, his career trajectory faltered, and he retired from the screen after making The Private Life of Don Juan (1934) in England. Restless to the end, he divorced Pickford in 1936, married again a year later, and, after years of traveling and a series of half-hearted business ventures, died in his sleep of a heart attack in the early morning hours of December 12, 1939.

Fairbanks remains the very embodiment of energy and optimism. In action and philosophy his was the poetry of pose, the strut of sentiment. He was an equal opportunity enthusiast who played no favorites in the democracy of delights. He pulled high-fives with the world and claimed its privileges. An influential businessman as well as a film celebrity, he helped found the Academy of Motion Picture Arts and Sciences (serving as its first president), promoted the importation and distribution in America of international art house films like Eisenstein's Potemkin (1925), and encouraged technical innovations in the film industry like the Technicolor process (which he employed in The Black Pirate).

His upbringing in Colorado and stage training in New York City lent his work a peculiar blend of western vigor and eastern attitude. Particularly in the cycle of Westerns he made from 1915 to 1919, East meets West and civilization collides with nature in imaginative and entertaining ways. In pictures like The Lamb and The Mollycoddle (1920), he's an effete aristocrat tested by the rigors of cowboy life. In The Good Bad Man and The Half Breed (1916) he's a bandit and an Indian, respectively, seeking the legitimacy of society. And in Wild and Woolly (1917) and Knickerbocker Buckaroo (1919) he erases altogether the boundaries that separate the cowboy from the clubman. Shot on locations in prairie Kansas, the desert Southwest, and the Grand Canyon, these films provide spectacular scenic arenas for his boundless energies and flamboyant acrobatics. In a typical moment from The Mollycoddle, he stands poised on the rim of the Grand Canyon, suddenly raises his hands, and shouts, "Hurrah for God!" It's a defining moment.

Schickel, Richard. His Picture in the Papers. New York: Charterhouse, 1973.