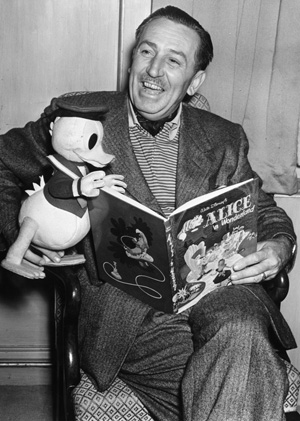 After creating Mickey Mouse in 1928, Walt Disney proceeded in his cartoons, movies, television shows, and theme parks to establish an entertainment empire, dedicated to recreating American popular culture in Disney's own image. Walt was essentially a product of his midwestern upbringing. Born in Chicago on December 5, 1901, the fourth son of Elias and Flora Disney, he grew up in two Missouri towns, rural Marceline and urban Kansas City, where he acquired the background experience and moral outlook–Protestant values, indomitable self-reliance, a sturdy work ethic, and a distrust of outsiders–that would pervade all of his work.

Disney began as a cartoonist and animator from 1921 to 1923 for Kansas City Film Ad and for his own company, Laugh-O-Gram, producing animated advertisements for local theaters and a series of fairy tales for national distribution. Before he left Kansas City for good in 1923, he had gathered around him a circle of friends and associates who would, either as colleagues or eventual competitors, follow him to Los Angeles and collectively change the face of American animation: Ub Iwerks (thereafter Disney's chief technical supervisor), theater organist Carl Stalling (who would later join the Warner Bros. cartoon unit as its principal composer), Fritz Freleng (later a cartoon producer for Warner Bros. and for his own Depatie-Freleng company), and Hugh Harmon and Rudolph Ising (later the heads of Harmon-Ising animation, which originated the Bosco cartoons and the Merrie Melodies series for Warner Bros.).

In important respects, Walt never really left Kansas City and the Midwest behind. By all accounts, his early years working on his father's farm near Marceline, Missouri, were filled with pain and hardship, dominated by his abusive father. Yet he transformed and idealized this miserable experience into a fantasy of life in a picturesque, turn-of-the-century small town–with its town square, bandstand, and quaint shop fronts–that appears in virtually all the Mickey Mouse cartoons (beginning with Steamboat Willie in 1928) and in dozens of live-action feature films and television shows, including So Dear to My Heart (1946), Pollyanna (1960), Mary Poppins (1964), and the Mickey Mouse Club series in the 1950s. Significantly, it was Marceline's Main Street that Disney reconstituted into the "Main Street" of the theme parks in Anaheim, Orlando, Paris, and Tokyo, the only area through which every visitor must pass. This obsession with order and detestation of dirt points up the midwesterner's ambivalent attitude toward the soil, the fertile ground from which both food springs and encroaching weeds must be cleared away, and it is most graphically demonstrated in the substantial amount of screen time (fully one-third of the total film) devoted to Snow White's instructions to the Seven Dwarfs about how best to clean up their cottage. Walt insisted with equal fervor on tidying and cultivating his own media image as a plainspoken interpreter of cultural artifacts like classical music and great works of literature, diluting and packaging them in forms accessible to the great American mass audience. Although he died on December 16, 1966, this process, dubbed the "Disneyfication" of America, continues. He embodies the energy that once settled the New World, plowed it under, paved it over, and pushed its frontiers ever westward and that now busily reconfigures it into myth and memory.