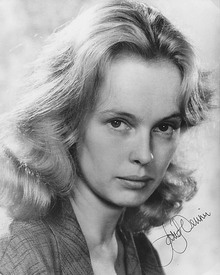 The actress Sandy Dennis, whose nervous and fragile screen persona had very little to do with the real person, was born in Hastings, Nebraska, on April 17, 1937. Her father was a postal clerk. At the age of fourteen, after watching Kim Stanley and Joanne Woodward in the television production A Lady of Property, she realized that her calling was acting. Her talent quickly became evident. She played leading roles in high school plays and in the Lincoln Community Theater; at the age of nineteen she left Nebraska for New York City and a distinguished career in acting.

Within three months Dennis had won her first professional role as a thirteen-year-old in Henrik Ibsen's The Lady from the Sea. She studied with Lee Strasberg at the Actors Studio and secured major roles in Broadway plays in the early 1960s. By 1964 she had collected two Tonys and a New York Drama Critics Poll Award.

Dennis's movie breakthrough came in 1967, when she played Honey, the whimpering wife of the young faculty member in Who's Afraid of Virginia Woolf. She won an Academy Award for best supporting actress for her performance. Other critically acclaimed performances in comedies and dramas on stage and screen followed, but her popularity declined in the 1970s and 1980s, partly because she refused to glamorize her appearance. Her final film role was in 1991 in Sean Penn's The Indian Runner, fittingly set in Dennis's home state of Nebraska.

Dennis was briefly married to her longtime companion, jazz musician Gerry Mulligan, from 1975 to 1976. However, a self-described "solitary person," she seemed to be more comfortable in the company of cats and dogs than of people. Sandy Dennis lived the final years of her life with her mother in Westport, Connecticut, where she died of ovarian cancer on March 2, 1992.