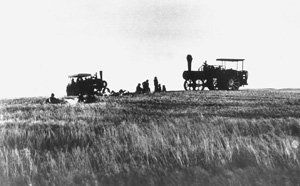 Days of Heaven, written and directed by Terrence Malick and released in 1978, is perhaps the most pictorially beautiful depiction of the Great Plains ever created on film. Set in the Texas Panhandle at the onset of World War I but actually filmed in the wheat fields of Alberta, the film reflects Malick's sensitivity to a landscape he knows well, having worked on the wheat harvest as a teenager, following it from his native Texas north to Canada.

Like his first film, Badlands (1973), which was based on the Charles Starkweather/Caril Fugate murder spree across Nebraska in the late 1950s, Days of Heaven employs voice-over narration, emphasizes the setting, and centers on poor and uneducated characters. But Days of Heaven is more generalized and distanced, almost mythic. This quality is effected by a number of elements: the plot, based on the tragic love triangle of Bill, Abby, and "the Farmer," unfolds episodically but with implacable inevitability; there is a preponderance of long shots; dialogue is held to a minimum; water, fire, and a plague of locusts are important to the visual presentation; the characters are often backlit (with the sun behind them, they are virtually silhouetted) and thus depersonalized; and much of the shooting was done at the "magic hour" right after sunset, producing a clear and lonely light.

Nestor Almendros, the film's internationally renowned cinematographer, explained that Days of Heaven was shot in Alberta because it was a Hutterite area, largely untouched by modern influences. The Hutterites' wheat was longer than conventional wheat varieties, their silos were red, and collectors among them were in possession of steam tractors and cutters. This landscape evoked the Plains of the early twentieth century.

Perhaps because of this pastoralism, some critics have thought that the film lacks any political view of the impoverished farmworkers, but this judgment is debatable. The film's title sequence is a montage of black-and-white still photographs of turn-of-the-century urban poor people taken by Lewis Hine, among other noted photographers, followed by the opening sequence of a Chicago steel mill that shows Bill (Richard Gere) in an argument with the foreman that leads to his flight by freight train to the wheat fields. In the fields we see harvesters' pay docked by the farm foreman for a "short line" a little while before the Farmer's accountant tells him that he's becoming the richest man in the county. The voice-over of Bill's sister Linda (Linda Manz) includes lines such as "the rich got it figured out" and "some got more than they need, others less." This is not to suggest that Days of Heaven is primarily a progressive political film; rather, the issue of class is an aspect of the whole.

If Days of Heaven has a problem it is with the whole. Its elliptical plot–the love story of Bill, Abby (Brooke Adams), and the Farmer (Sam Shepard)–does not sustain the tenor of the film because the characters lack depth of development. What is compelling is the cycle of Plains seasons–the harvest, winter snow, the emergence of spring shoots–with its eloquently rendered evocation of the natural order.