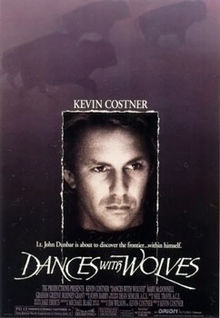 Kevin Costner's Academy Award-winning Dances with Wolves (1990) is likely the most powerful cinematic reminder of the grandeur of the prairie that once spanned the heart of the North American continent. Although best known for its revisionist treatment of Indians (Lakota Sioux) in the last years of and just after the Civil War, Dances with Wolves offers many scenes that help convey the color, breadth, and vastness of the Great Plains. Dances was shot on location for five months in South Dakota, and the centerpiece of the film is an extended buffalo hunt during which Costner's character, Lt. John J. Dunbar, kills a wounded buffalo that threatens a young Sioux and is then informally initiated into the tribe. For the hunt, Costner took his actors and crew to a 62,000- acre ranch northwest of Pierre, South Dakota. Holding 3,500 head of bison, the ranch offers visiting hunters the chance to shoot bison at $1,500 a head.

Exploiting wide-screen cinematography and an epic format more common to the 1950s and 1960s, Dances is a finely crafted film. The acting is outstanding in a genre not known for patient explorations of character; the cinematography of a reimagined Great Plains, cavalry blues, Sioux buckskin and face paint, and horses, wolf, and buffalo blend a wide-screen lushness with the austerity of a nature documentary; the editing is expert; and the gliding camera complements the restrained performances of all the actors. Many scenes and moments use little or no dialogue, encouraging attention to imagery, sound effects, and a now-alien aural environment. Early in the film, Dunbar silently brushes his hand across the waist-high grasses of the prairie. Later in the film, we see Kicking Bird (Grahame Greene) repeat the gesture. The parallelism provides a powerful evocation of the sublime force of the great prairie on people of the period. While classic Westerns had most often been set in valleys over which the Rockies towered or amidst the other-worldly landscapes of Monument Valley, Dances with Wolves carefully and quietly evoked the grandeur of a more subtle geography, where muted earth tones and the big sky dominate.

In November 1993 ABC broadcast a longer version of Dances that incorporated footage left out of the original American theatrical release. Much of the material, nearly an hour long, expanded on themes established in the first film. More environmental destruction is seen. A white hunting camp on sacred Sioux grounds is strewn with animal carcasses and empty whisky bottles. The prior inhabitants of Fort Sedgewick are shown, isolated on the Plains and surrounded by Indians, the remainder of the command reduced to savage living in cliff-side dugouts–a dark contrast to Dunbar's successful transition to nature and Indian ways. A recent treatment of the "vanishing American" narrative, Dances ends, unsurprisingly, far above the Plains, with Dunbar and his bride, Stands with a Fist, ascending a remote, snow-covered mountain, their tribe hunted by the army, the prairie no longer a refuge from accelerating encroachment.