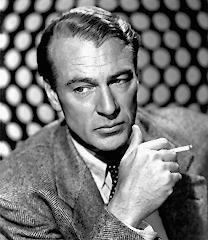 Gary Cooper, the son of English immigrants, was born Frank James Cooper in Helena, Montana, on May 7, 1901. His lawyer father, Charles Cooper, in addition to owning a ranch outside of Helena, served for a time as a member of the Montana State Supreme Court. Young Frank loved the western life; hunting, fishing, riding, and the natural grace we associate with his screen persona doubtless relate to his being so at home in the outdoors.

After high school, Cooper, who aspired to become a political cartoonist, bounced from college to college until he found himself in Los Angeles, where his lanky frame (he was nearly six feet three inches tall), stunning good looks, and horse-riding ability helped him to win numerous roles in a series of B-Westerns. His break as an actor came in 1926, when Cooper, whose agent had changed his screen name to Gary, was cast as one of the leads in Henry King's silent film The Winning of Barbara Worth. But 1929 was his watershed year, with his performance in Victor Fleming's adaptation of Owen Wister's classic Western novel The Virginian. This film marks the advent of the distinctive Cooper hero, an identity from which he rarely deviated during his thirty-sixyear career.

The Gary Cooper hero is characterized by a seemingly simple and naive, almost awkwardly shy and soft-spoken persona, equally appealing to both men and women, whose authentic nature emerges only when his sense of honor and his personal courage are challenged by a significant moral crisis. In The Virginian the eponymous hero, now a ranch foreman, is forced to preside over the hanging of his cattle rustler best friend, Steve (Richard Arlen). In slow close-up director Fleming focuses on the agonized face of the Virginian as Steve is hanged and captures brilliantly the grief, suffering, and profound solitude of the conscience-stricken Cooper hero, for whom the virtuous life always exacts a heavy cost.

Although only a third of Gary Cooper's films were Westerns, he is best identified as a Western star, perhaps because in all his films he is so closely associated with certain qualities of the West that have been derived from our indigenous historical, literary, and folkloric traditions. Indeed, the Cooper hero may have been the most unaffectedly natural, the most enduringly appealing and admirable, of the great masculine American character types.

In 1937, for example, Cooper made one of his most popular Westerns, The Plainsman, a Cecil B. De Mille adventure epic based very loosely on the lives of Wild Bill Hickok (Cooper), Calamity Jane (wonderfully played by Jean Arthur), and Buffalo Bill (James Ellison). Despite the film's historical inaccuracies and genial superficiality, Cooper, in his heroic portrayal of Indian fighter Bill Hickok, manages to endow it with considerable gravity and good sense. The viewer is ultimately startled by Hickok's death at the hands of Jack McCall in Deadwood, South Dakota, only because he seems so completely in control of his own life. And yet a fatal aura of fragile, wounded humanity surrounds him even in this generally winsome film, if only because Hickok's relationship with Calamity Jane is marred by a previous betrayal, and, like the Virginian, he has lost another friend, Buffalo Bill, this time to marriage.

The Cooper hero emerges more profoundly in a far superior film, The Westerner (1940), directed by William Wyler. There Cooper's representative Western type (it is interesting that, more than any other Western actor, he could play types, like a "Virginian," a "Plainsman," a "westerner," or, much later, a "Man of the West") subdues a deranged father-figure, the fanatical Judge Roy Bean (Walter Brennan), in such a way that we feel both the justice of Bean's downfall and the terrible loss for the westerner that that just downfall entails.

Gary Cooper gave his greatest performance as Will Kane, the ravaged hero of the cold war classic High Noon (1952), for which he won his second Academy Award (the first was for Sergeant York [1940]). Betrayed and driven to the brink of despair by his fellow citizens in the ugly, dusty Plains town of Hadleyville, Will Kane walks its lonely streets in his solitary struggle against the evil Frank Miller gang. Ultimately, he is forced to confront Miller by himself, and he does so with Odyssean cleverness and intelligence. Finally, at film's end, his enemies vanquished, in one of the most bitterly cynical moments in any Western, Kane contemptuously hurls his marshal's tin star into the dust of Hadleyville as he and his wife, Amy (Grace Kelly), the only person who has finally come to his aid, leave the town and ride out onto the prairie.

Bertolt Brecht once remarked that Gary Cooper was the world's greatest actor because he was never guilty of acting. Cooper's natural affability and goodness of spirit, mixed with a complex moral seriousness, all helped to define his iconic "Americanness" as he strove in film after film to embody our national character at its ideal best. He set a standard no American star has ever matched. "Just make me the hero," Cooper once remarked to a director before he had even seen a script. The director did make him the hero, and so, of course, did we the audience throughout his exemplary career. Gary Cooper died on May 13, 1961, in Beverly Hills, California.