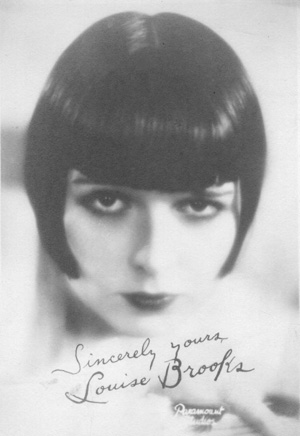 Actress, dancer, and writer on film, Louise Brooks is perhaps best known for her role as Lulu in the silent film Pandora's Box (1929). She was born Mary Louise Brooks on November 14, 1906, in Cherryvale, Kansas, to Leonard and Myra Brooks, a lawyer and touring speaker, respectively. Her first stage role was at age four; she later performed as a dancer at local clubs and fairs in southeastern Kansas. At age fifteen Brooks joined the Denishawn Dance Company, the leading modern dance troupe in America. After two years with Denishawn, Brooks left the company and landed parts as a chorus girl in George White's Scandals and as a specialty dancer in the Ziegfeld Follies. She had the distinction of being the first person to dance the Charleston in London.

Brooks's career had declined by the mid- 1930s. After a brief sojourn in Wichita, the once-celebrated actress settled in New York City, where she lived for more than a decade in obscurity. She later moved to Rochester, New York, and began writing; her first article appeared in 1956. Over the next three decades, Brooks contributed numerous essays to various film journals. Her highly acclaimed 1982 book, Lulu in Hollywood, includes essays about her life and the careers of other movie stars. Brooks's legendary beauty and distinctive bob hairstyle have been celebrated in numerous films, plays, novels, poems, comic strips, artwork, and songs. She died of a heart attack in Rochester on August 8, 1985.