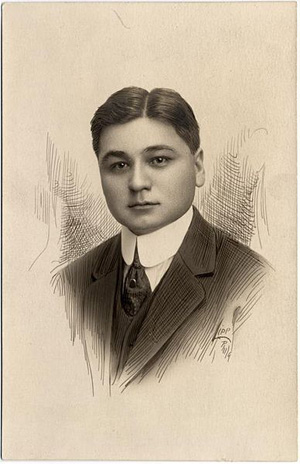 Born on the Winnebago Reservation in northeastern Nebraska on December 28, 1884, to parents who still lived mainly by hunting and trapping, Henry Roe Cloud went on to become, in Commissioner of Indian Affairs John Collier's words, the "most important living Indian."

Henry Roe Cloud was originally called Wohnaxilayhungah, or Chief of the Place of Fear. He was given the name Henry Cloud by a reservation school administrator. Later, while an undergraduate at Yale, he was adopted by Dr. and Mrs. Walter C. Roe, and he joined their name to his own. Cloud graduated from Yale in 1910, the first Native American to do so, and he added to his credentials a bachelor of divinity degree from Auburn Theological Seminary in 1913 and a master's in anthropology from Yale the following year.

Though educated in American institutions and convinced that Native Americans should strive to succeed within American society, Roe Cloud was also a Native American activist. As an undergraduate at Yale, he campaigned successfully for the return of Geronimo's Apaches from Fort Sill, Oklahoma, to the Mescalero Reservation in New Mexico. Also while an undergraduate, he was instrumental in the founding of the Society of American Indians, which advocated higher education for Native Americans. Roe Cloud's persistent hope was that Native Americans could become selfsu. cient through education. In 1915 Roe Cloud founded and became president of the Roe Indian Institute in Wichita, Kansas, the first college preparatory school for Native Americans in the United States. The school operated until 1935, though in 1931 Roe Cloud arranged for its takeover by the board of the national missions of the Presbyterian Church as his obligations and ambitions at the national level of federal Indian affairs multiplied. One of those ambitions, to become commissioner of Indian Affairs, was never realized, but he played a key role in the preparation of the Meriam Report (1928), which starkly revealed the failings of the federal Indian policy. As a Progressive and New Dealer, he supported Collier's reforms in the 1930s, including the Indian Reorganization Act of 1934.

In 1933 Collier appointed Roe Cloud head of Haskell Institute (Kansas), the largest of the Bureau of Indian Affairs's off-reservation high schools. Cloud's two years at the school were difficult as he fought to integrate Native American traditions into the curriculum and to broaden the existing focus on vocational education. He was appointed supervisor of Indian education in 1936 and superintendent of the Umatilla Reservation in Oregon in 1939, but again he was disappointed when he failed to secure a position on the Indian Claims Commission, and in these later years he felt that he was shunted aside by the bureau. Henry Roe Cloud died in Siletz, Oregon, on February 9, 1950.