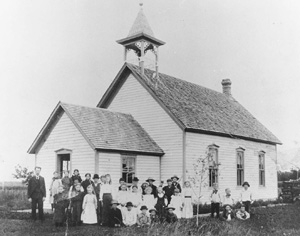 One-room schoolhouses once were a common feature in the Great Plains. One teacher, typically a young, single woman, taught farm children in grades one through eight in a small building on the prairie. Often the teacher had only an eighth-grade education herself. Still, rural children got a basic education good enough to produce a literacy rate that was higher than that in many other parts of the nation.

Support for rural public schools originated with the federal Land Ordinance of 1785, which began the land surveys that laid out townships and sections across the growing nation. Every township was to consist of thirtysix sections containing 640 acres each. Section 16 and later, in 1848, section 36 were set aside to support schools. By the early 1900s oneroom schoolhouses dotted the countryside throughout the Great Plains and the Midwest to such an extent that the heartland contained nearly half of the more than 200,000 oneroom schools nationwide. These schools were not only the center of learning for the community but also the center of the community as a whole. Community meetings, worship services, weddings, family celebrations, and funerals were held at the school, often the only public building in the area.

The first schools were built of readily available material. On the Plains, that may have been sod or, in more wooded areas, logs. Some schools were little more than dugouts. Eventually, wood frame and even brick became the common mode of construction. As they were often poorly insulated, one-room schools were hard to heat, and ine.cient wood- or coal-burning stoves were common fixtures. Teachers had to open the school, start the fire, and handle all the custodial duties. Restrooms were outhouses. Water came in by pail from a neighboring farm until a well was dug. Still, students learned the basics: reading, writing, and spelling were the common subjects. Math, history, geography, and handwriting usually filled out the curriculum. Students committed the lessons to memory, then recited them from the front of the room. By the end of the eighth grade students had heard the same lessons many times over.

The decline of rural schools began with President Theodore Roosevelt's appointment of the National Commission on Country Life in 1908. The commission set about to improve the quality of life–and education–in rural America. With the advent of better roads and automated transportation, school consolidation led to the first wave of elimination of oneroom schools, often after a bitter debate that pitted farmers against their cousins in town.

One-room schools struggled through the Great Depression. In the aftermath of World War II many one-room schools were eliminated as mobility became more common, mechanization increased farm size and reduced farm numbers, and the migration of population from rural to urban areas accelerated. In the state of Kansas, for example, half of the state's one-room schools were closed between 1945 and 1950.

The rapid elimination of country schools continued over the next decade. By 1958 some Great Plains states had all but eliminated them entirely, while other states still operated hundreds but not thousands as they once had. By the mid-1980s fewer than 1,000 one-room schools could be found throughout the nation, and more than half of these were located in three Great Plains states: Montana, Nebraska, and South Dakota.

Today, many of the few existing one-room schools are threatened with extinction. Those that remain, however, have moved past the basics to include computer literacy as well as the three R's.