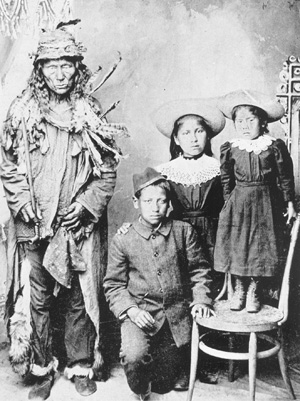 The modern phase of Canada's residential schools system for First Nations children emerged in the 1880s in the Prairie Provinces, and several of the institutions would continue to exist in that region after the government of Canada decided to phase out the institutions in 1969. Missionaries and colonial governments had experimented with boarding schools for Native children as early as the French colonial regime of the seventeenth century, and other custodial institutions were initiated by Protestant missionary organizations in eighteenth-century colonial New Brunswick and early-nineteenth-century Upper Canada (Ontario). However, the modern era of residential schooling in Canada began in the Prairies in 1883 as a direct consequence of the treaties that Canada had negotiated with the First Nations between 1871 and 1877. The system began slowly in the Prairies in 1883, spread to British Columbia in the 1890s, and expanded to the far North and the northerly regions of Ontario and Quebec in the twentieth century. At the height of the residential school system in the 1920s, more than half of the eighty institutions were located in the three Prairie Provinces.

Indian residential schools were joint operations of the federal government and the major Christian churches. The government authorized the creation of schools, provided partial funding for their operation, specified curricula and standards of care, and, in general, oversaw their operation as a system. The day-to- day running of the institutions was in the hands of the churches, with approximately 60 percent of the schools operated by the Roman Catholic Church (mainly through the Oblates of Mary Immaculate and female religious orders), about 30 percent by the Anglican Church, and the remainder by the Methodists and Presbyterians. (The Methodists and most Presbyterians united with the Congregationalists in 1925 to form the United Church of Canada.) Church missionary bodies concentrated on selecting personnel, particularly principals, subject to the approval of the government. A constant source of tension between missionaries and the government was the level of state funding, which was never adequate to cover most of the costs of the schools. The various churches also tended to regard one another with denominational hostility, resulting in a competition for recruits to populate their schools.

The strong emphasis placed by the missionaries on sectarian attitudes toward denominational rivals and the aggressive proselytization of the students under their care constituted but one of the many grievances that both residential school students and their families had with the system. Inadequate government funding, especially from the 1890s to the latter part of the 1950s (the government began to improve financing after 1956), led to overwork of the students and inadequate care in diet, accommodation, clothing, and amenities such as recreational equipment. The root of the funding problem was government reluctance to spend much on the First Nations, principally because Canadian society placed little value on Native peoples, and the fact that the per capita funding mechanism that was used induced missionaries to place a greater emphasis on keeping student places in the schools filled than on providing adequate care.

Since, like American schools, Canadian residential schools operated until the 1950s on the half-day system, the administrators had ample occasion to overwork the students. The half-day system theoretically taught both usable job skills and rudimentary academic learning by having students in the classroom half the day and engaged in work in fields, barns, kitchens, and workrooms the other half. In reality, the half-day system proved a means of extracting student labor to keep the underfunded schools running. Besides excessive work and ethnocentrically focused religion, the schools stimulated opposition by providing inadequate care at the best of times and serious physical, emotional, and sexual abuse at the worst. These ills, in conjunction with the obvious fact that the schools were not succeeding as pedagogical, evangelical, or vocational-training operations, provoked strong and organized First Nations opposition by the 1940s. After much hesitation, largely caused by vigorous Roman Catholic opposition to closure, the government decided in 1969 to phase out the schools. Some schools persisted into the 1980s, and a few continued to operate under First Nations control until the 1990s.

In the twenty-first century Canada's residential schools are a festering legal and political problem for Canadians. By the end of 2000 more than 6,200 individual lawsuits involving some 7,200 individuals had been filed against the government and, in some cases, the missionaries; they allege abuse, both physical and sexual, and cultural loss. The number of suits continues to increase weekly. One law firm in the Prairie Provinces is handling over half the suits.

Milloy, J. S. A National Crime: The Canadian Government and the Residential School System, 1879 to 1986. Winnipeg: University of Manitoba Press, 1999.