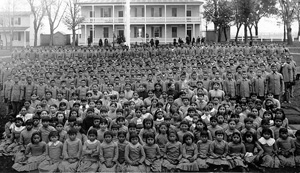 Indian boarding schools, a primary focus of federal Indian policy beginning in the late 1870s, were designed as instruments for the assimilation of Native Americans into American society and were established on and off reservations throughout the United States, especially in the Great Plains. Boarding schools first appeared on reservations in 1877, but, beginning in 1879, policy makers seeking higher potential for assimilation channeled their efforts into building them off the reservations. By 1900 officials had reversed their decision, disturbed by the high costs associated with these schools, and, until 1923, they renewed support for on-reservation boarding and day schools. In 1923 pressure from Indian rights activists led the government to decrease its role in Indian education and, with the passage of the Indian Reorganization Act in 1934, to withdraw even further.

From the early nineteenth century, philanthropists and political leaders promoted assimilation through education as the most humane approach to the "Indian problem." Education was initially left to missionaries and philanthropists, who, with the support of church denominations and the government's "civilization" fund, established schools along with missions among Plains Indians during the 1830s. Mission schools remained an important component of Indian education—and assimilation—policy throughout the century, though they declined in importance after 1873, when direct federal financial support was removed. The federal government did, however, continue to contract with religious denominations to support mission schools, but their era was over.

The federal government moved to fill the gap. In 1870 Congress initiated an annual appropriation of $100,000 for Indian education. By 1893 the annual appropriation had risen to $2.3 million. The bulk of the money went to establishing day schools on or near Indian villages and later on reservations. By 1870 48 day schools were in operation, and the number had risen to 147 by 1900; the majority were on reservations in the Great Plains.

But reformers were not entirely satisfied with day schools. The reservation environment, to which the child returned daily, undermined the process of assimilation. By the end of the 1870s policy makers were promoting reservation boarding schools as a solution to the shortcomings of the day schools; they viewed these schools–and the resultant separation of Indian children from their families– as a superior context for changing children's attitudes, values, and habits. Like the day schools, which still received support, the majority of reservation boarding schools were built in the Great Plains.

As the idea of reservation boarding schools took hold, so too did the idea of federally operated schools off reservations. These schools followed the model of Richard Henry Pratt's Carlisle Indian Industrial School, founded in Pennsylvania in 1879, with an initial enrollment recruited from the Plains. The children received instruction in academic subjects (English, arithmetic, and geography) and also worked on manual labor projects. Boys labored in the fields, in construction, and in the blacksmith's shop; girls were taught to cook, clean, and sew. The objectives were to instill a work ethic, individualism, and other tenets of American civilization and to suppress all that was Indian.

Federal off-reservation boarding schools first appeared in the Great Plains in 1884 with the opening of Chilocco in Indian Territory near the Kansas border, Genoa in Nebraska, and Haskell in Lawrence, Kansas. Plans were soon under way to expand further. Pratt had urged o.cials to build off-reservation schools only in completely white communities, as far away from reservation influence as possible, but policy makers were concerned about the cost of transporting Indian children long distances. To save money they decided to build schools closer to the reservations, and in 1882 congressional authorization to use vacated military buildings reinforced this decision.

Enthusiasm for federal off-reservation boarding schools quickly faded after the turn of the twentieth century. In 1901 Commissioner of Indian Affairs William Jones expressed alarm that $45 million spent on 20,000 Indian children had produced little evidence of assimilation. His 1904 annual report emphasized the necessity of utilizing existing reservation boarding and day schools more effectively. Arguing that these schools were no less effective than the off-reservation schools for assimilation, Jones proposed a hierarchy of existing schools that would provide the greatest opportunity for assimilating the best students with the greatest potential for surviving in the white world.

The building phase was over. Thereafter, Indian education policy deemphasized off- reservation schools. Policy makers argued that Indians were incapable of (more accurately, resistant to) the rapid assimilation envisioned by Pratt and noted that most Indians educated in the system of schools returned to the reservation. With this shift in emphasis, the number of boarding schools began to decline, and by 1920 seven of the federal off-reservation schools, including the flagship Carlisle as well as Chamberlain, had closed.

By the 1920s the long-lasting and unsuccessful assimilation policy was in decline. John Collier's American Indian Defense Association, founded in 1923, worked for the next decade to change the focus of federal Indian policy from destruction of Native cultures to respect for individual Indian self-identity. Collier became commissioner of Indian Affairs in 1933. In 1934 the passage of the Wheeler- Howard Indian Reorganization Act established a "New Deal" for Native Americans, providing for tribal landownership, self-government, control of Indian education, and the closing of many of the remaining federal off- reservation boarding schools. The Great Plains education map is now dotted with reservation community day schools, Bureau of Indian Affairs postsecondary schools (for example, Haskell Indian Junior College), and tribally controlled community colleges such as Sinte Gleska on Rosebud Reservation in South Dakota, the first Indian-run college to offer bachelor's degrees. The off-reservation boarding schools at Flandreau and Pierre, however, continue to operate.