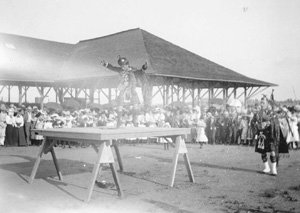 A woman dancing the Highland fling in Scottish costume, Denver, Colorado, between 1904 and 1910

Frontiersmen of Scottish origin were attracted to the Great Plains long before the region was permanently settled by European Americans. Americans and Canadians of Scottish descent were among the first to venture into the area, and if those of Ulster Scots heritage such as Kit Carson and Davy Crocket are included, the numbers become still more impressive.

The Hudson's Bay Company and its rivals for the fur trade recruited much of their staff either directly from Scotland–particularly from the Orkney Islands–or from the largely Highland Scots population of Glengarry County in eastern Ontario. But the Hudson's Bay Company did not remunerate its workers very well, and a considerable number of dissatisfied former company employees transferred to the American Fur Company, including Kenneth McKenzie, the "King of the Missouri," who presided over the fur trade on the Northern Great Plains in the 1830s from his base at Fort Union. The Hudson's Bay Company continued to actively seek employees in Scotland until well after World War II, long after its economic interests had shifted from the fur trade to land development and department store investments. Highlanders were also a major component of the Earl of Selkirk's Red River Settlement, founded in 1812.

Other Scots who made their mark in the Great Plains were political refugees such as Allan Pinkerton, the founder of the well-known detective agency, who emigrated to North America as a result of his involvement in radical politics in Glasgow in 1842. Scottish investors financed much of the cattle boom of the 1880s in the Great Plains. The Matador Land and Cattle Company, founded by two Americans and later sold to a consortium of Dundee businessmen, was one of the most significant and long-lasting ranching corporations. Under the management of Murdo Mackenzie, a native of Tain, in Rosshire, Matador extended its operations from Texas to New Mexico, Oklahoma, Nebraska, South Dakota, Montana, and Saskatchewan. The Scottish-owned Matador landholdings in Texas were not broken up until 1951. Other Scots of note in the livestock industry included the Eighth Earl of Airlie, who chaired the Prairie Land and Cattle Company and the Dundee Land Investment Company, and John Sutherland Sinclair, a North Dakota rancher who had emigrated in 1875 at the age of seventeen. It has been estimated that in the late 1870s and 1880s three-quarters of all foreign investment in ranching in America came from Scotland. Scots also invested in mortgage companies, mining, and railroads, many of which were also financed in Scotland.

Scotland provided more than its share of migrants in the late nineteenth and twentieth centuries. While an increasing proportion of these migrants came from urban communities in lowland Scotland and gravitated to major cities in the United States and Canada, many also headed to the Great Plains seeking land. The Montana writer Ivan Doig, in his novel Dancing at the Rascal Fair (1987), describes the emigration of an apprentice wheelwright and a wheelworks clerk from the Scottish county of Forfar to "Scotch Heaven" in northwestern Montana. Doig's Angus Mac- Caskill and Rob Barclay must have been typical of many Scots artisans who saw a bright future in the ownership of land, which was virtually impossible in Scotland, where the tenanted farms were rarely offered for sale. Artisans and skilled farmworkers, who were numerous in Scotland during the nineteenth century, often found emigration to the Great Plains a much more attractive proposition than the alternatives open to them at home. They applied the skills learned in their homeland to stock farming and crop production, and although new methods of dryland farming had to be learned, the industrious producer could hope to make a success as a landowner in the Great Plains. One of these emigrants, the South Dakota rancher Scotty Philip (a native of Auchness, near Lossiemouth), was instrumental in saving the Plains bison from extinction.