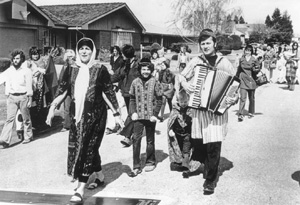 Anti-Semitism and lack of economic opportunities caused about 1.25 million Jews to leave Europe for North America between 1880 and 1914. Jewish immigration to the Great Plains during these years was either kin-based or promoted by agencies such as the Hebrew Immigrant Aid Society and the Industrial Removal Office. Additional influxes followed World War II, with smaller numbers arriving from the Soviet Union after 1975 and from Russia after 1989. Jewish settlement in the Great Plains, with notable exceptions, has been urban. Routes of access for most Jewish immigrants were east to west across both Canada and the United States, and for smaller numbers, north from the port of Galveston, Texas.

Early Jews on the Plains were peddlers serving Native Americans and homesteaders. Most Jews subsequently settled in small towns, where they established retail dry goods stores, clothing and grocery stores, wholesale houses, and, along the rail lines, scrap metal operations. They gradually gravitated to larger cities with better Jewish communal infrastructures. The minimum critical mass necessary to maintain substantial Jewish communal organizations appears to be about 1,000 Jews. Second and third generations gravitated toward law, teaching, and medicine, and later into the corporate world.

Plains cities with significant Jewish populations include Winnipeg, Manitoba; Calgary, Alberta; Regina, Saskatchewan; Billings, Montana; Omaha and Lincoln, Nebraska; Wichita, Kansas; Oklahoma City, Oklahoma; and Amarillo and Fort Worth, Texas. Still, the Jewish presence in the Great Plains has never been more than 2 percent of the general population, and it is much less than this in rural areas. Ninety-six percent of Manitoba's Jews, for example, live in Winnipeg.

As settlement increased, Jewish organizations proliferated in Plains cities. These included welfare organizations, houses of worship, free loan societies, and, in the larger cities, Jewish community centers. Local organizations had regional, national, and international connections. The Anti-Defamation League, Workmen's Circle, and the World Zionist Organization, women's groups like Hadassah, National Council of Jewish Women, and synagogue sisterhoods, and men's groups like B'nai B'rith linked Plains Jews through education, activism, and philanthropy to New York, Palestine, and Israel. Reform Temples were linked to Cincinnati; Conservative, Orthodox, Reconstructionist, and Lubavitch were linked to New York. To ameliorate isolation Jewish youth and adults were encouraged through these organizations to meet coreligionists in Kansas City, Chicago, and New York. Jews in smaller towns maintained contacts with rabbis, synagogues, and family and friends in the closest urban area.

Although rural Jewish populations were never large, as part of the "back-to-the-land movement" of the 1880s, Jews took up farming on homesteads with start-up loans from agencies such as Cincinnati's Hebrew Union Agricultural Society, Chicago's Jewish Agriculturalists' Aid Society of America, and the Jewish Agricultural and Industrial Aid Society. In Canada the government offered incentives, including exemption from military service, to attract Jewish homesteaders. New Jerusalem, founded in 1882 in Saskatchewan, was one of the earliest Plains Jewish settlements. In North Dakota the first settlements were around Painted Woods and Devils Lake. After 1900 Burleigh County in central North Dakota became the focus of Jewish settlements. By 1910, the peak year, North Dakota had 250 Jewish homesteads with 1,200 individuals. Other Plains settlements were at Touro, Leeser, Beersheba, Lasker, Gilead, Montefiore, and Hebron in Kansas, and at Cotopaxi, Colorado. However, no more than 10 percent of the Jewish families stayed on the farms for ten years; at the most 2 percent passed ownership to a second generation. Lack of money and experience was a problem, and many sold their homesteads when they received titles after the five-year residency and used the money to set up businesses in Plains towns, or else they left the region altogether. Often only a Jewish cemetery survives as a reminder of the Jewish homesteading movement. More enduring and successful were individual entrepreneurs like southern Wyoming sheep farmer Isadore Bolten and the Wolf family who ranched in Albion, Nebraska, for more than seventy-five years.

In the cities, Jews participated widely in politics and intellectual life. Jewish politics in Winnipeg had a radical cast. In American politics Jews served as mayors, members of the House of Representative and Senate, and justices on state supreme courts. Tillie Olsen, one of the most significant Jewish writers, lived in Omaha, Nebraska, in the 1920s. In the latter part of the twentieth century, centers for Jewish studies were established in several Plains universities, deriving much of their financial support from prominent Jewish philanthropists.

Oliver B. Pollak University of Nebraska at Omaha

Libo, Kenneth, and Irving Howe. We Lived There Too: In Their Own Words and Pictures—Pioneer Jews and the Westward Movement of America, 1630–1930. New York: St. Martin's Press, 1984.