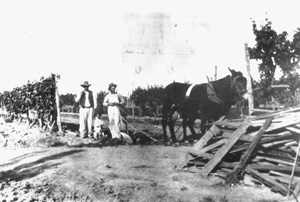 Italian immigrants entered the Great Plains first as missionaries such as Fra Marco da Nizza (1495-1558) and Eusebio Francisco Kino (1645-1711), and later as adventurers such as Count Leonetto Cipriani (1816-1888) and Italian American Charles Siringo (1855-1928). Since Italy was not a unified country until the Risorgimento (1860-70), early sojourners were either in the service of Spain or France or were individual agents. In the mid-1800s the combination of economic and political conditions encouraged some Italians, like the six officers and enlisted men in Gen. George Armstrong Custer's Seventh Cavalry Regiment, to find adventure on the Plains. After 1869 the transcontinental rail line brought Italian journalists and tourists to the Great Plains; their letters and published travel memoirs provided information about the people, geography, and potential jobs to countrymen back home.

Italian emigration began in earnest in the late 1880s, when political and economic upheaval coincided with natural disasters. A rapid rise in Italy's population increased pressure on the land, which in many areas had been farmed to the point of exhaustion; years of poor rainfall contributed to famines and poverty; and in 1887 a devastating outbreak of malaria left 21,000 dead. Leaving one's village in search of work in other parts of Europe was a tradition in Italy. Between 1886 and 1890, however, there was a significant increase in emigration from Italy, and by 1890 immigration to America surpassed movement to other parts of Europe. Until 1886 Italian immigrants were predominantly from the Piedmont, Venetia, and Lombard areas in northern Italy. By the 1890s, however, 90 percent of those leaving were from the south, or mezzogiorno, especially Abruzzi, Calabria, Campania, and Sicily. From 1891 to 1910, the years of heaviest Italian emigration, 880,908 immigrants came to the United States. Although exact numbers are difficult to determine, approximately 24,000, or about 3 percent of the total, moved to the Great Plains. During this same period approximately 62,633 Italians, roughly 4 percent of the total immigrant population, moved to Canada, with 6,650, or about 10 percent of them, finding their way onto the Plains.

Perhaps as many as 70 percent of Italian immigrants were contadini, peasants who in Italy had lived in town and farmed a few acres in the surrounding countryside. With few exceptions, Italian immigrants on the Plains came to work in railroad and mining camps or as urban laborers. Railroad and mining companies recruited heavily to bring Italian workers to the Plains, offering cheap transportation and higher wages than in Italy. In a few instances padroni such as Antonio Cordascoi, the Montreal labor broker for the Canadian Pacific Railway, directed immigrants to jobs on the Canadian Plains, but most Italians found work through word of mouth.

Prior to 1880, Canadian immigration policy restricted southern European settlement; it was not until 1881, when construction of the Canadian Pacific Railway increased demand for unskilled labor, that Italians began to emigrate in large numbers, increasing from an average of 360 per year to more than 1,000 per year, with a peak of 27,704 in 1913. The immigration pattern was similar to that in the United States; the majority of Italians who ventured into the Canadian Plains found jobs with the railroad or in the coalfields. One notable difference was that Canadian Italians would often move on, to Toronto, Montreal, Vancouver, or the United States, to avoid harsh winters and to find work. It was not until the Canadian mines began to close in the 1940s that the numbers of Italians in Plains urban areas, particularly Edmonton and Winnipeg, began to accumulate in appreciable numbers. Between 1945 and 1960, in both Canada and Italy, immigration policies encouraged a new wave of immigration to Canada, consisting mainly of skilled laborers. Although as many as two-thirds of these new immigrants stayed in the larger eastern cities, urban centers on the Plains such as Calgary, Edmonton, and Winnipeg experienced substantial population growth. For example, Winnipeg's Italian population increased from 1,743 in 1951 to 4,216 in 1961.

All across the Great Plains, Italians worked together to help newly arrived immigrants find jobs and places to live. Small boarding houses provided familiar food, language, and a comforting family atmosphere. Churches and schools were quickly established, as were mutual aid societies, such as the Dante Alighieri Society and the Christopher Columbus Society. The societies also served as sites for labor union meetings in mining regions. "Little Italy" neighborhoods developed in urban areas such as Omaha, Edmonton, and Sheridan, Wyoming. Italian-English newspapers were published in Omaha and Edmonton. Many Italians who decided to remain in the Plains gradually worked up from their initial menial jobs to own shops, farms, or businesses and became active in local politics. As many as 50 percent of all Italian immigrants, however, returned to Italy once they had saved money to buy land or improve their ancestral farm.

In both Canada and the United States, immigration legislation in the 1920s and early 1930s, combined with Benito Mussolini's efforts to reduce emigration, dramatically reduced the flow of Italian immigrants, although the movement was never eliminated entirely. By the late twentieth century, Italian immigrants were no longer contadini looking for manual work or skilled workers arriving with families, but were university students and professionals searching for educational and career opportunities difficult to find in Italy.