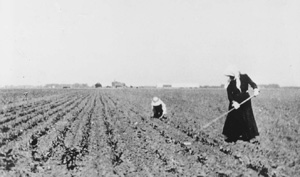 German Russians are a unique group of Germans who lived in Russia after the 1760s and began their immigration onto the Great Plains in the 1870s. In 1762 Catherine the Great of Russia launched an aggressive campaign to entice skilled farmers into the Volga region to turn the area into a productive agricultural region and to create a human buffer zone against the persistent threat of Asian marauders. She offered transportation money and various privileges: freedom of religion, no military service, protection of culture and language, and the option to leave if they became unhappy with their situation. Approximately 23,184 settlers took advantage of the offer. The greatest number came from areas heavily damaged by years of war–Hess, the Rhineland, and the Palatinate. Between 1764 and 1768, 104 mother colonies along the Volga River were settled. Between 1804 and 1824 more Germans, mostly from the Danzig region of West Prussia, accepted the same privileges from Czar Alexander I and began farming colonies along the north littoral of the Black Sea.

In the late 1860s, as the trend toward nationalism swept across Europe, Alexander II began to rescind German Russian privileges; by 1871 the only privilege left was their opportunity to leave. The first wave of emigration out of Russia corresponded with the grace period before conscription into the Russian army began. Between 1873 and 1914 approximately 115,000 German Russians immigrated to the United States and about 150,000 to western Canada.

German Russians settled in the Great Plains as they had in Russia, according to their Evangelical, Catholic, or Mennonite faith. In towns where German Russians from more than one village congregated they tended to cluster together, reproducing their home villages in Russia, and for the first few generations there was little intermarriage between groups. The tradition of large families also continued– eight children or more was not uncommon.

Railroad companies were instrumental in moving the German Russians onto the Plains with offers of cheap land. The land tenure system in Russia, however, often determined the ability to farm in the Plains. Those from the Volga region lived under the muir system, where land was held in common by the colony and distributed according to family size. Without money from land sales in Russia to purchase railroad land, and with homesteading mostly taken, Volga Germans often found work in Plains railroad towns as day laborers or as migrant farm workers. Over time, some families were able to save enough money to purchase farms.

Terms of immigration to Russia during the era of Alexander I did allow Black Sea German Russians to buy and sell land. Although not wealthy, these German Russians often purchased farmland or started businesses in town when they arrived in the Plains. Those who worked the land found the Plains environmentally similar to their Russian homeland, and the crops and agricultural practices they had developed to cope with those semiarid conditions worked well on their new Plains farms.

Accurate statistical data on German Russians immigrating to Canada are more difficult to determine. It is estimated, however, that by 1910 approximately 44 percent of all German settlers in western Canada were Germans from Russia. Movement into Canada began in 1874 when Mennonite settlers, denied their request for closed, block settlements in the United States, chose to settle the Prairies of southern Manitoba. Although disapproving of block settlements, the Canadian government was anxious to populate the new province and granted the Mennonites their request. This set the precedent for the creation of a mosaic of sizable ethnic islands in the Canadian Prairies. While some mixed-group settlements were established, most of the German Russian groups settled in block communities that were based on religion–Catholic, Evangelical, or Mennonite–and area of origin in Russia—Black Sea or Volga region.

Overall, Black Sea Germans found it easier than Volga Germans to assimilate into Plains communities. Because of their location in Russia close to the trade centers of the Black Sea, they were more familiar with modern capitalist trends. The Volga Germans, by contrast, had lived isolated in the interior for almost 100 years. Their lack of familiarity with capitalist society inhibited assimilation. Their reluctance to learn English, as well as their premodern work habits–pulling children out of school to work and women working alongside men in the beet fields–were significant factors in the discrimination against them.

Until 1914, as immigrants worked frantically to bring other family members out of Russia, the flow of new Germans from Russia onto the Plains helped to replenish their Old World culture. World War I effectively ended immigration and encouraged assimilation; however, strong German Russian communities still exist.

Hale, Douglas. The Germans from Russia in Oklahoma. Norman: University of Oklahoma Press, 1980.

Koch, Fred C. The Volga Germans in Russia and the Americas from 1763 to the Present. University Park: Pennsylvania State University Press, 1977.