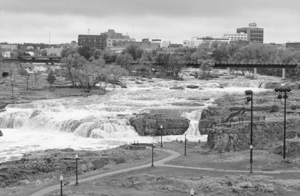 Strategically located in southeastern South Dakota at the junction of Interstates 29 and 90, the city of Sioux Falls is positioned for the future to take advantage of the expanding trading opportunities with Canada via I-29 and the coast-to-coast trade between Boston and Seattle by way of I-90. The city takes its name from a series of falls on the Big Sioux River located north of the present downtown area.

It is believed that Native Americans inhabited the falls area for at least 1,500 years before the arrival of European explorers. The first verified visit of non-Indians to the specific site was not by European explorers but by members of the U.S. Army led by Capt. Joseph Allen on September 12, 1844. Several years later, in 1856 and 1857, land speculators from Iowa and the territory of Minnesota arrived at the falls to lay out town sites. This early attempt at settlement proved premature because the Sioux Uprising of 1862 forced the abandonment of the area. Only with the building of Fort Dakota in 1865 did the settlers feel safe to return.

The reestablishment of Sioux Falls did not lead to a dramatic increase in population, but it did result in the town becoming the county seat of the newly created Minnehaha County in 1868. Not until the first railroad arrived in Sioux Falls in June 1878 did the town's population begin to grow dramatically; by 1890 there were 10,177 inhabitants in the city. At the same time Sioux Falls earned the distinction of being the largest city in South Dakota, a title the city has since held; in 2000 the city's population was 124,000.

The city's economy has always been intertwined with the agricultural economy of the region. In 1909 this relationship was made manifest when John Morrell and Company established a large meatpacking plant in Sioux Falls, and in 1917 the Sioux Falls Stockyards were created. With the reputation of having built Sioux Falls, the Morrell Company provided good-paying jobs and served as the major employer of the community for most of the twentieth century.

Beginning in the 1980s, the dominance of the Morrell Company in the Sioux Falls economy began to fade as the city started a conscientious effort to diversify and expand its economy. In 1981 the New York City-based Citibank Corporation moved its credit card- processing center to Sioux Falls because of the city's favorable business climate and the passage of special banking legislation by the state legislature. Following the example of Citibank, other financial institutions soon followed. The 1980s also witnessed the expansion of the local hospitals, Sioux Valley and Avera McKennan, transforming Sioux Falls into a regional medical center. At the end of the decade, Hutchinson Technology, a computer technology company, arrived in Sioux Falls.

The city gained national recognition for its economy and quality of life when Money magazine in 1992 declared Sioux Falls to be the number one community in the United States.