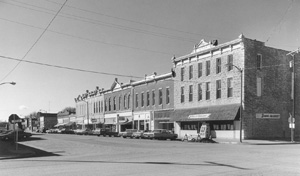 Main Street is the heart and soul of all Great Plains towns and cities, the starting point from which all towns in this region began. The combination of community development, economic growth, and the love-hate relationship with the automobile makes the Great Plains Main Street distinctive from other Main Streets in North America.

Main Street is a planned development that integrates traffic, commercial markets, and public open space. The most common characteristic of Great Plains Main Streets is that they are part of a grid system of streets. Main Street is the spine within a series of streets arranged in a perpendicular pattern. The benefits of a grid pattern of streets allows for an efficient flow of traffic and maximizes building access from the street. Main Streets also share the following types of land uses: commercial space for trade and banking; government space for governance and justice; public open space for celebrations and festivals; and churches for religious, educational, and town meetings. All of these land uses were tightly confined to a few blocks for several reasons. First, communities just getting started had limited resources. Consequently, Main Streets initially developed within a couple of blocks in order to handle the most immediate community needs. Second, most Great Plains Main Streets were developed at a time when commerce was primarily regional in focus and did not require a large amount of space or infrastructure to support area businesses. Finally, since Main Streets were not built in an era of modern telecommunication capabilities, most community life was handled directly through face-to- face interactions, which were more easily accommodated by a densely organized Main Street where everything was in easy walking distance.

In addition to meeting local community needs, Main Streets were also developed to generate economic resources. The economic attractiveness of the Main Street design is two-fold. First, organizing a community around Main Street provided local buildings with easy customer access from the street. Buildings that are easily accessible from the Main Street thoroughfare generate more revenue and have a higher real estate market value than buildings that are located on less traveled arterial routes. Second, the grid pattern of streets made it easier for towns to accommodate new growth. All a town needed to do to grow was to expand its infrastructure of roads and utilities by adding another block along Main Street. The ease of Main Street expansion made real estate speculation less risky because block sizes were standardized and new developments were anchored by the established activity already on Main Street. In some cities, like Topeka, Kansas, Main Street grew solely by real estate development. Plains railroad towns are another example of towns developing on a Main Street schema for real estate speculation.

Much of the current demise of Main Streets came about through the combination of mass ownership of automobiles and a changing economy that dictated a new logic in the development and organization of town space. Beginning in the 1920s, automobiles became more prevalent due to their increasing affordability and dependability. Motorists' demands for decreasing tra.c congestion and improving vehicle access to buildings resulted in reconfiguring Main Streets to accommodate the car. Main Streets were retrofitted for this rising mobility through widening the street, adding traffic signals, and providing more on-street and off-street parking. By the end of World War II, the attractiveness of high-density Main Streets had come to an end. The advent of mass automobile ownership required buildings to be more accessible to cars than to pedestrians. The requirement of parking spaces forced buildings away from the street and set them, almost as a backdrop, behind the parking lot. Also, streets had to be widened even more, and the stoplights had to be calibrated to allow for a tolerable flow of vehicular movement along Main Street and to prevent unacceptable levels of traffic.

In some Great Plains communities, Main Streets became economically obsolete because of their existing dense configuration of buildings arranged along a narrow high-tra.c corridor. In such places, Main Streets never grew beyond their original buildings. The impacts of telecommunications and the economic postwar boom in the 1950s and 1960s also created demand for more decentralized Main Street space. Commerce from the 1950s to the early 1970s was no longer dependent on face-to- face transactions. Decisions could be made and business deals closed with the interested parties being physically in two different parts of the world. In addition, regional economic systems were becoming more national and international, requiring larger facilities that could not be accommodated in the old Main Street system of spaces. It was becoming less cost-effective for businesses to be located in Main Street buildings with high rents, limited space (especially for storage), and inconvenient parking.

For other communities, the commercial decline of their downtown Main Streets was the result of an overly successful planned and managed Main Street. In these cases, the grid pattern of streets with Main Street as the lynchpin was so successful that it drew people and economic development out of the Main Street core to the suburban fringe. Main Street grew beyond the downtown to become the arterial spine of suburbanized sections of the city, accommodating higher traffic densities and lower building densities such as the suburban shopping mall. Lincoln, Nebraska, is one example of a popular Main Street that expanded out to the suburban fringe, carrying development away from the original downtown section.

A revival of the original pedestrian-based Main Street system has been gaining momentum since the 1970s. This revival was fueled by international trends such as rising gasoline costs, renewed appreciation for historically significant buildings, antisuburbanization sentiment, and, more recently, computer and telecommunication innovations that make businesses less tied to suburban commercial spaces. The rekindling of the Main Street spirit has also been supported by the cooperative efforts of individual entrepreneurs, local civic groups, and national organizations like the National Trust for Historic Preservation. After years of neglect and countless facade modifications, old Main Street buildings are now being restored and maintained according to their original design. Perkins, Oklahoma, is one example of a town working to restore historically significant buildings on its Main Street. The town's restoration efforts are nicely illustrated in the 1993 refurbishing of the Baker's Store Building, built in 1890 on the corner of Main and Thomas. Through such community revitalization, Great Plains residents are once again making Main Street the heart and soul of their community.