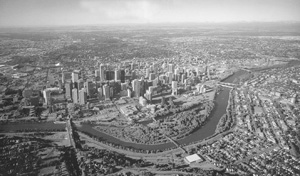 The city owes its origin to the fort established by the North-West Mounted Police in 1875 at the confluence of the Bow and Elbow Rivers near the junction of the Prairie grasslands and the forested Foothills belt fringing the Rocky Mountains. Calgary occupies an area of mainly flat postglacial lake deposits at a height of 3,400 feet downtown, with relief provided by the scarps of the incised river valleys and glacial overflow channels and the eastern outliers of the Foothills belt. The city has a cold and dry continental interior climate—the typical Calgary day has an open blue sky, and the mean precipitation level is only fourteen inches. Locally, the altitude, which reduces summer temperatures and the number of frost-free days, and warm chinook winds, which moderate the cold winter climate, also exert their influence.

The transcontinental Canadian Pacific Railway reached Calgary in 1883, creating a small service center that was incorporated as a town in 1884. Despite its designation as a city in 1896, the center only contained 4,000 people by 1901, since most of the surrounding area was still sparsely populated and dominated by large cattle ranches to the west. The influx of pioneering farming families led to Calgary's first major boom as a regional service center based on agricultural processing and railway marshaling industries. A central business area emerged, with buildings built of distinctive local sandstones. By 1911 the population had reached almost 44,000 and a decade later was over 63,000, making Calgary the eighth largest city in Canada.

The discovery in 1914 of the Turner Valley gas and oil field, thirty miles to the southwest, led to Calgary's rise as the administrative center of the industry. Major oil and gas discoveries in other parts of Alberta after World War II fueled a boom in the industry, but the head offices remained in Calgary despite the expanded national and international roles of the oil companies. The result is that Calgary has always had a significant role as a corporate headquarters center. The city is home to 103 of the top 800 companies in Canada, as ranked by revenue, compared to greater Toronto with 234, greater Montreal with 104, and Vancouver with 51. Most of these head offices and their ancillary companies in law, finance, geology, surveying, and transportation remain downtown, along with government offices and other service industries. Hence Calgary's city center– a distinctive modern high-rise complex with 32 million square feet of office space and more than 106,000 workers–has remained the city's primary center of employment.

Calgary's government structure consists of an elected mayor and fourteen councilors elected on a ward basis. Calgary's concentrated high-rise downtown contrasts dramatically with the low-density sprawl of the rest of the city, which explains why the city has the highest per capita car ownership and gas consumption in Canada. Yet strong planning controls by its unicity government structure have meant that suburban residential development has been based on detailed community plans for more than forty years. A distinctive feature of Calgary's suburban development has been the creation of residential areas anchored by a recreational complex, nine built around artificial lakes and six around golf courses. The city also has more than 130 residential community associations, most of which have their own community halls. Although these associations occupy a relatively small role in most people's lives, they are routinely consulted on planning developments, and they play an active role in recreational and social provision. When added to the participation of the Calgarians in other associations, the city has produced one of the highest levels of citizen volunteerism in cities in the Western world.

In view of the corporate basis of the city, it is not surprising to find that its employment structure is dominated by services: in 1996 only 9.4 percent of employed people were in manufacturing, 6.7 percent in construction, and 12.0 percent in transportation and communication. Most of the industrial activity is located in a distinctive sector extending southeast from the inner city. The oil industry has attracted one of the highest concentrations of computer power on the continent, which has stimulated a rapidly growing electronic- and technology-based sector, with more than 30,000 jobs. Another important amenity is the University of Calgary, which had a student enrollment of 24,000 and an external research budget close to $100 million in 2000. The 1990s also saw the city develop as a transportation and depot hub for western Canada, although it no longer has a regular passenger rail service. Its airport, with more than seven million passengers per year, is the fourth largest in Canada.

Calgary has traditionally been peopled by immigrants of British and Irish descent, who accounted for 83.6 percent of the population by 1921. There was also a strong American presence, since 21 percent of Alberta's residents at the time were born in the United States and had joined the pioneering rush to the Canadian Prairies. Americans were also attracted to the oil industry, both in an administrative capacity and in exploration and production. After World War II the ethnic balance changed as new immigrants from western and northern Europe moved to the city. By 1971 only 56 percent of the residents had a British Isles ethnic background, another 21 percent were of German, Scandinavian, and Dutch origin, while 3.9 percent and 2.4 percent were of Ukrainian and Italian origin, respectively. Since the 1980s the immigration streams have altered again. The 1996 federal census revealed that 20.8 percent of the city's population was born outside Canada, and a third of this number come from a variety of Asian countries. The largest Asian group, numbering approximately 50,000 in 1996, are the Chinese. Most are scattered throughout the city, although there is still a significant concentration in a redeveloped Chinatown on the edge of downtown that contains a large number of restaurants, businesses, high-rises, and a re-creation of Beijing's Temple of Heaven as a cultural center.

The proximity of the city to the Rocky Mountains and its national parks means that Calgary has become a gateway for recreational visits to the area. In addition, the Winter Olympics of 1988 gave the city world exposure and left a significant heritage in world-class winter sports facilities in the city and vicinity. The presence of a ranching industry in the foothills to the west provides a link to the past, but the ranching economy of the city has long since disappeared. However, the annual Calgary Stampede is still a major presence that keeps the heritage alive. During Stampede week the majority of people in the city, whatever their ethnic heritage and occupation, take pride in dressing up in cowboy costumes, giving the city a distinctive if invented tradition and character. This image has been enhanced by the recent development of Spruce Meadows, just outside the city boundary to the south, which now hosts some of the world's premier horse jumping events.

The annual re-creation of Calgary's cowboy past may provide an easily recognizable image but should not be allowed to conceal the city's true character of a modern, affluent, corporate metropolis. It has virtually no slum areas, a 68 percent home ownership figure, one of the highest rates of postsecondary educated people in Canada, and a median annual income of $50,000 per census family in 1996. Calgary is also characterized by large amounts of recreational space, especially along the major rivers and in a series of parks, of which Nose Hill is the largest. Calgary's recent growth has made it a demographically young city, and only 8.7 percent of the population is over sixty-five years of age. The result is a dynamic and increasingly cosmopolitan center, a city with high levels of amenity but one still intimately linked to the oil and gas industry, despite recent trends in economic diversification.